Feltham (/ˈfɛltəm/) is a suburban town in the London Borough of Hounslow in west London, England, 13.5 miles (21.7 km) west of central London and 2 miles (3.2 km) south of Heathrow Airport. It is the site of Feltham Young Offenders' Institution.

Feltham formed an ancient parish in the Spelthorne hundred of Middlesex. The Domesday Book records 21 households and an annual value of six pounds sterling; it was held as lord and tenant-in-chief by Robert, Count of Mortain. A large area of ten cultivated ploughlands is recorded. Following Mortain's son's forfeit of lands (William's rebellion triggering the attainder), the land was granted to the Redvers/de Ripariis/Rivers family. The heir in that family, Hubert de Burgh ('Chief Justiciar and Earl of Kent') swapped Feltham and Kempton with Henry III for his manors of Aylsham in Norfolk and Westhall in Suffolk. In 1440 Henry VI granted numerous privileges to his joint royal custodian of the two manors, including a daily income of up to 12 shillings and that "corn, hay, horse and carriages and other goods and chattels should not be seized for the king's use".

While under total royal control following Henry VIII's full annexation of the manor into the Honour of Hampton Court, a lease of all of its manor court rights and "franchises, privileges, emoluments, and hereditaments" was granted under his daughter Elizabeth I to the Killigrew family of Kempton Park, for 80 years.

However the large manor itself passed 40 years later in 1631 by grant to Francis (Lord) Cottington, established at his new Hanworth Park, who had become Lord Treasurer, ambassador and leader of the pro-Spanish, pro-Roman Catholic faction in the court of Charles I. His nephew sold it, after a major fire and a very temporary loss caused by John Bradshaw, who arranged the King's execution, under the Commonwealth of England, to Sir Thomas Chamber(s). His son inherited Feltham manor, whose daughter by an empowering marriage to Admiral Vere (created Lord Vere) of Hanworth in the same historic county of Middlesex (created for him 1750) led to its next owner having a very high title and degree of wealth: her son, Aubrey Beauclerk, 5th Duke of St Albans inherited the manor and a dukedom with considerable land from a cousin. The Duke was a British landowner and a collector of antiquities and works of art, seated occasionally at Hanworth, who funded an excavation in Italy which produced many sculpture artifacts. Parting with much of the Duke's surfeit of large country houses, minor plot sales dividing the two ancient manors took place in the 19th century. Finally in the early 20th century, until death, the land now considered Feltham was either already subdivided by developers and farmers or owned by senior judge Ernest Pollock turned politician, (1st) Viscount Hanworth who saw the very large Hanworth manor, which covered most of Hanworth parish divided up due to taxation and its being equally well-placed to cater to the demand for new homes due to transport links.

In this period in 1784 General William Roy set out the baseline of what would become the Ordnance Survey across Hounslow Heath, passing through Feltham. General Roy is commemorated by a local pub. The MOD Defence Geographic Centre maintains a base in Feltham, announced for disposal in the 2015–2020 Parliament.

In 1831, Feltham occupied an area of 2,620 acres (11 km2), stretching into Hounslow Heath and had a population of 924. The Waterloo to Reading Line established a station here from its construction in 1848. From 1894 to 1904 the Felham parish was included in the Staines Rural District. In 1901 the parish had a population of 4,534 and accordingly in 1904 it was split from the rural district to form the Feltham Urban District. In 1932 the parishes of Hanworth and East Bedfont were also transferred from the Staines district to Feltham Urban District.

Feltham Urban District (colloquially known as Feltham council) was disbanded in 1965, along with the Middlesex County Council. It should be noted, however, that though for administrative purposes Feltham is now part of Greater London the geographic and historic county of Middlesex was never abolished by statute. A poll on the Feltham, Hanworth and Bedfont Appreciation Society group on Facebook found that Feltham residents overwhelmingly continue to identify their home county as Middlesex.

Although opened in 1910, major expansion took place in a similar period, at the extreme south-west of the post town, at Feltham Young Offenders' Institution or HM Prison Feltham, which is a major such institution providing a range of employments and rehabilitation schemes for young people. near the town's border with Ashford and the neighbouring village of East Bedfont.

Famous former resident Freddie Mercury (born Farokh Bulsara in Zanzibar, 1946–1991) of rock band Queen was commemorated by a permanent, Hollywood-style granite star in Feltham's town-centre piazza, unveiled on 24 November 2009 (the eighteenth anniversary of Mercury's death) by Queen guitarist Brian May, alongside Freddie's mother, Jer Bulsara, and his sister. In 2011, owing to neglect and weather damage, Hounslow Council removed the memorial, resolving to substitute a smaller one elsewhere.

The land is relatively flat but well-drained, and Feltham is centred 13.5 miles (21.7 km) west south west of central London at Charing Cross and 2 miles (3.2 km) from Heathrow Airport. 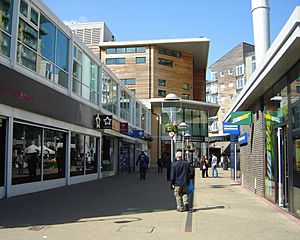 Feltham's town centre developed in a socio-economically indicative way in the period 1860-2010 when the focus of the village moved north from by St Dunstan's Church - the coming of the railway and immediate establishment of a station was in 1848. For most of the twentieth century, it had a traditional-looking High Street, including more mock tudor shop fronts, and a large medieval manor house which was controversially demolished in the mid-1960s to make way for a Ford car dealership and petrol station. This has since been demolished but replaced with a hardware, carpets and supermarket site Manor Park.

Most of the original High Street shops were also demolished in the mid-1960s through to the early 1970s. Victorian and Edwardian tall-storey terraced, semi-detached and detached homes are particularly on Hanworth Road and adjoining roads, and in the small conservation area at Feltham Pond on the High Street. Many old cottages and workman's terraces were demolished alongside the railway line to make way for brutalist high rise blocks of housing, of originally purely social housing to house the homeless and overcrowded people in the borough such as Belvedere House and Hunter House and Home Court, demolished in the 2000s and replaced with mixed-ownership apartments in a more ornate style in a cluster, incorporating designer balconies and architectural demonstrations of free-form structure such as propped overhangs and an unobtrusive at street-level, multi-faceted floor plan.

The current shopping hub, The Centre, Feltham (also known as the Longford Centre, if only by the original developers and some retail tenants), opened in 2006. It retained and refurbished many of the shop units built in the 1960s to replace the demolished buildings, along the High Street frontage, but replaced most of the others with new, larger units. Also added as part of the re-development was a Travelodge hotel, 800 homes, a new and larger library, and a medical centre. The "anchor" (and largest) store in the Centre is an Asda hypermarket, coupled with fashion chains, small restaurants, a public house and cafés. Near to the retail park mentioned is a Tesco superstore and numerous grocery outlets are dotted along the area's High Street. Added to this are regular local trades/services in small clusters in the main named neighbourhoods of North Feltham and Lower Feltham. Prior to this large-scale redevelopment, the rock band Oasis filmed the video for their song Stand By Me in The Centre in 1997.

In retail, the closest destination with more than 100 outlets is Hounslow, centred less than 2 miles (3.2 km) to the north-east, followed by Kingston and Staines (both -upon Thames). 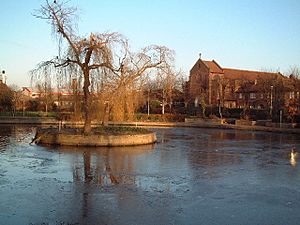 Feltham has in its land use considerably more open spaces than average in (Greater) London — bounding it to the east is a natural small river, the Crane separating off the once vast Hounslow Heath to the east, stretching from north by Harlington south to Hampton, London until the early 20th century. To other sides it includes a country park formed from converted gravel pits (Bedfont Lakes) with rolling adjacent meadows open to walkers by its railway and (within the post town) one of London's first airfields, London Air Park at Hanworth, which has well-trimmed grass, is surrounded by trees and is a large and sports-oriented public open space.

Public venues include Feltham Assembly Hall, opened in 1965 in Feltham Park, community rooms in the new library, as well as several residents association halls and clubs. Since the controversial removal in 2008 of the Feltham Community Association from the Feltham People's Centre (the former Feltham Hotel), the town has lacked a dedicated community centre.

Feltham Community College (originally known as Feltham Comprehensive School when it was formed from two secondary modern and one grammar school) and Rivers Academy West London (known as Longford School/Longford Community School from its foundation in 1935 to 31 July 2011) both have excellent sports facilities. These supplement the Hanworth Air Park Leisure Centre and Library, operated by Fusion Leisure on behalf of Hounslow Council. Leisure West (a privately developed and managed complex of entertainment and dining facilities including a multiplex cinema, tenpin bowling alley, bingo club and restaurants) opened on the former industrial sites around Browell's Lane in the mid-1990s. Feltham has a Non-League football club Bedfont & Feltham F.C. who play at the Orchard in East Bedfont.

The 2011 ethnic groups in Feltham were:

This is combined data for the Feltham North and West wards with Feltham North being slightly more ethnically diverse than Feltham West. 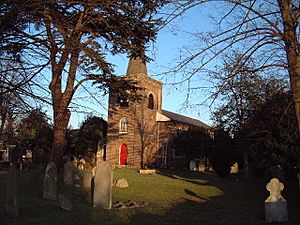 The town remains among the largest ecclesiastical parishes of the Diocese of London within the Church of England. The parish church of St Dunstan and the Parish of Feltham have joined with two other churches to create a larger Ecumenical Parish of Feltham founded in the late 1970s. This joins the church together in activities and church services with Southville Methodist Church and the United Free Church of Feltham.

On 24 June 1868, Father Ignatius founded an Anglican Benedictine convent in the parish. Feltham Priory, or Feltham Nunnery, was dedicated to Saints Mary and Scholastica (twin sister of St Benedict). It lasted five years before the nuns initiated a series of moves which would see them relocate to Curzon Park Abbey in Chester in 1988.

The tall spire fronting tower of an additional church first built 1880-1898, to St Catherine, opposite the railway station forms the façade of St Catherine's House, a London Borough of Hounslow Housing office and temporary housing accommodation. As of August 2014, St Catherine's House is now closed because the council have moved out and relocated elsewhere. 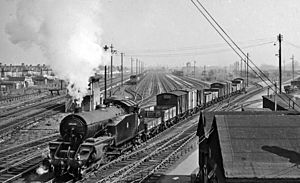 Nearby Hatton Cross tube station, which is on the Heathrow branch of the Piccadilly line provides a Central London and Heathrow rail option to Feltham, with bus routes 90, 117, 235, 285, 490, H25 and H26 running frequent services through the town.

The town is served by all passenger trains, including semi-fast trains through Feltham railway station, except for some weekend specially timetabled steam trains, with services terminating at Waterloo. On the Waterloo to Reading Line, the other terminus is Reading. Two branch line services operate on the line here, to Windsor and Weybridge.

The town has London Buses services to Kingston upon Thames, Richmond, Brentford, Heathrow, Staines-upon-Thames, Northolt, Isleworth and Sunbury on Thames. Intervening places such as Hayes, Hounslow, Hampton Court/Hampton and Ashford are called at.

Long distance express services are offered predominantly from various sides of Heathrow to places such as Slough, Reading, Berkshire and Croydon, the latter under the London Buses pricing and operational scheme.

All content from Kiddle encyclopedia articles (including the article images and facts) can be freely used under Attribution-ShareAlike license, unless stated otherwise. Cite this article:
Feltham Facts for Kids. Kiddle Encyclopedia.