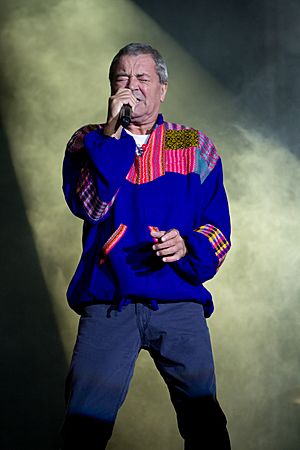 Ian Gillan (born 19 August 1945) is the lead singer for the heavy metal band Deep Purple. He is famous for his high-pitched falsettos and the ability to reach notes much higher than most people. He also wrote lyrics to many of their famous songs, including "Smoke on the Water." Gillan is also noted for singing the part of Jesus on the original rock opera concept album Jesus Christ Superstar. Gillan later became lead singer of Black Sabbath.

All content from Kiddle encyclopedia articles (including the article images and facts) can be freely used under Attribution-ShareAlike license, unless stated otherwise. Cite this article:
Ian Gillan Facts for Kids. Kiddle Encyclopedia.