Blackmore was born in Weston-super-Mare, Somerset. His family moved to Heston, Middlesex when he was two. 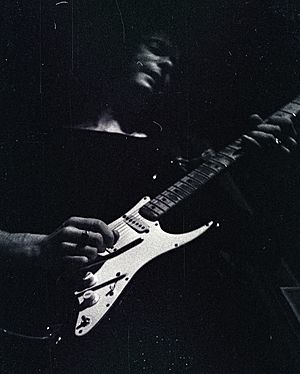 In the 1950s, Blackmore played with small bands. In 1968, Blackmore , with keyboardist Jon Lord, singer Rod Evans, bassist Nick Simper and drummer Ian Paice created the band Deep Purple. Deep Purple had a hit song in the United States with "Hush". Although they were doing well, Ritchie Blackmore and Deep Purple decided to get a different singer. They replaced Evans with Ian Gillan. The band's album Deep Purple In Rock was released in 1970. In 1972, Deep Purple made the album Machine Head. It included one of their most popular songs, "Smoke on the Water. In 1972, they recorded the live album Made in Japan. Gillan and Glover left the group in 1974. They were replaced with singer David Coverdale and bassist David Coverdale. The new Deep Purple released two albums Burn (1974) and Stormbringer (1974). Blackmore left the band soon after these albums were released.

In 1984, Blackmore got together with Gillan, Glover, Lord and Paice and made the album Perfect Strangers. The album had many successes with the songs "Knocking at Your Back Door" and "Perfect Strangers". After recording the album The Battle Rages On, Blackmore left the band in 1993. 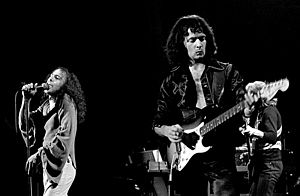 In 1975, Blackmore founded the band The Rainbow. The band included Ronnie James Dio as singer, Craig Gruber on bass, Micky Lee Soule on keyboards, and Gary Driscoll on drums. The band's first album, Ritchie Blackmore's Rainbow, was released August 4, 1975. It was followed by Long Live Rock 'n' Roll in 1978, with Cozy Powell in drums. On Difficult to Cure (1981), The band included the vocalist Joe Lynn Turner, replacing Dio. After several changes in it's members, Blackmore disbanded the band in 1997.

All content from Kiddle encyclopedia articles (including the article images and facts) can be freely used under Attribution-ShareAlike license, unless stated otherwise. Cite this article:
Ritchie Blackmore Facts for Kids. Kiddle Encyclopedia.