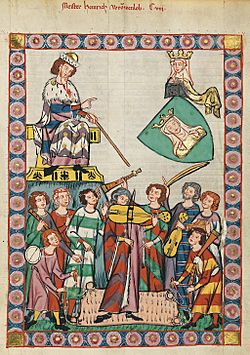 Medieval music is music from the Middle Ages. The time we call the Middle Ages is a long period from about 400 AD to 1400 AD. We do not know a great deal about music of this time because it was such a long time ago and music was not often written down. Music was used for entertainment.

In Europe there were people who went around the countryside making a living by singing and playing musical instruments. They often went to big houses where rich people lived and entertained them with their faces. These travelling musicians were called minstrels in England, and troubadours or trouvères in many other countries, or Minnesinger in Germany.

The minstrels often sang long songs which told stories (a ballad). This was a way to tell people about what was happening in the world. Some of the stories were made up: they were about love or about mythology.

Richard the Lionheart was a keen musician. He wrote many songs in the style of the trouvères. On the way back from a Crusade he was captured by Leopold of Austria. The story goes that his attendant, Blondel, was looking for him everywhere. Then he heard Richard’s voice singing a tune which he knew and so he found him. The song that he was singing was called Ja Nuns Hons Pris (I am no longer captive).

Minstrels very often went with their masters when they went on journeys to battles. They also sang at important ceremonies, for example when people were being knighted. Many of them played instruments such as the lute or fiddle.

Minstrels were poets and musicians, because they made up their own words and the tunes. Sometimes we know the words of these songs because they wrote them down, but they did not write the tunes down. Walther von der Vogelweide was a famous minnesinger in Germany.

Troubadours would go from town to town playing love songs.

There were two main types of dances in medieval times: line dances and circle dances. The farandole is a line dance. It was a bit like a modern conga with people following a leader in a line. The bransle was a round dance or circle dance. The word “bransle” comes from the French word “branler” (“to sway”). It is pronounced 'Brawl'.

Other dances were the basse dance and estampie.

The bagpipes were loud instruments for outside. They were used for dancing. They were not as loud as modern Scottish bagpipes. They were more like Northumbrian pipes or the French musettes. There was also the hurdy-gurdy which was played by turning a handle. Pipe and tabor were used for Morris dancing.

Many medieval plucked string instruments were similar to the modern guitar, such as the lute and mandolin. The dulcimer and zither were had strings which were hit with sticks. These are still popular in East Europe today. There were also “fiddles” (vielle) and trombones (called sackbut).

It was believed that if you were entertained with music while you are eating it would help you digest your food and help keep your heart healthy. And people believed that you will not get fat even if you scoffed down a load of food. Also eating food while having people dancing for you was believed to have made you fit.

Church music was very important. The mass was the main form of church music. It used the five parts of the mass Ordinary (the Eucharist service): Kyrie, Gloria, Credo, Sanctus and Agnus Dei. The priests in the churches wanted church music to be serious. They did not want it to become popular. They thought that if people enjoyed it too much they would forget about worshipping God. Religious plays had become very popular. They told stories from the Bible. However, the church leaders banned them, so they were performed in the streets and squares of the towns.

Instruments were also banned in church. The church leaders thought that they belonged to the devil. Only singing was allowed. Gradually, however, the organ started to be allowed in church. It helped people to sing. Some organs were very tiny. They were called portative organs. The large organs that were fixed in place were called “positives”. Bells were also used in church. They looked like our sleigh bells.

Medieval music was based on plainsong. This was a melody which sounded quite free in rhythm. Composers started adding a second part to the melody as an accompaniment. This was called organum. Sometimes it just simply followed the main tune a fourth or fifth below. This was called “parallel organum”. In the 12th and 13th centuries the original plainsong started to be put at the bottom. It became known as the cantus firmus (the “firm tune”). Sometimes antiphony was used. The simplest form of antiphony is when a leader sings something and a group (the choir) sing something back.

The type of plainchant that evolved was called Gregorian chant. By the 13th century all other types of chant had been forgotten in Western Europe.

Carols became popular at this time. At first a carol was a dancing song, but often these popular songs became used for songs for particular seasons or festivals. In later periods these developed into Christmas carols as we know them.

People often went around in groups, particularly at Christmas, singing at the houses of rich people. This was called Wassailing. The word means “being of good cheer” (i.e. “happy”). The Boar’s Head is a well-known medieval carol.

Mummers were groups of people who performed religious plays. They were travelling entertainers. They normally wore masks so that people did not know who they were.

There are not many musical manuscripts which have survived from the Middle Ages. Most of them are religious music. They were often written using a system called neumes. The pitch (music) of the music is shown by the neumes, but the rhythms were not very clear. Gradually the system of writing music we know today was evolving. Philippe de Vitry was an important composer and music theorist. He developed ways of writing rhythms.

Most of the medieval music we know today belongs to the last part of the Middle Ages. There was a tradition known as the “Notre Dame school”. This music dates from around 1150 to 1250. It was the time that great cathedrals were being built in Gothic architecture. The cathedral of Notre Dame was a very famous example. The music of this time was called “Ars antique”. It used a system of rhythms called “rhythmic modes”. Gradually a new way of writing was used. This was called “Ars nova” (“New art”). The most famous composer of this time was Guillaume de Machaut. He developed a kind of composition called the isorhythmic motet. He wrote a lot of songs called chansons (the French word for “song”). Other types of song were called rondeau, ballade, and virelai.

Composers who were born at the end of the Middle Ages such as John Dunstable, Guillaume Dufay, and Gilles Binchois are often thought to belong to the next period in music history: the Renaissance period.

All content from Kiddle encyclopedia articles (including the article images and facts) can be freely used under Attribution-ShareAlike license, unless stated otherwise. Cite this article:
Medieval music Facts for Kids. Kiddle Encyclopedia.