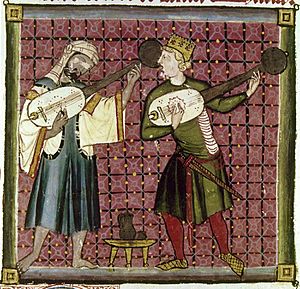 Image of a minstrel, from the 13th century

A minstrel was a composer of the medieval time period. Other names for them are minnesinger, troubadour and trouvere. A minstrel was also a name for black musicians in America of the 19th century and white musicians who appeared in blackface.

All content from Kiddle encyclopedia articles (including the article images and facts) can be freely used under Attribution-ShareAlike license, unless stated otherwise. Cite this article:
Minstrel Facts for Kids. Kiddle Encyclopedia.