The recorder is a musical instrument that is a type of flute. It is shaped like a tube with one end bigger than the other end. A recorder player puts the bigger end in their mouth and blows into it. 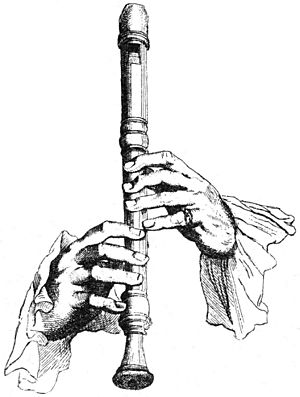 Whistles are very old instruments. People have found some whistles that were made in the Iron Age. A recorder is a type of whistle. It has holes for seven fingers and one thumb. It also has one end bigger than the other. The first recorders were made in the 1500s. Some remains of these have been found in Germany, the Netherlands and Greece.

Many people played the recorder in Europe in the 1500s and 1600s. King Henry VIII of England had 76 recorders. William Shakespeare talks about recorders in his play Hamlet and John Milton talks about them in his poem Paradise Lost. Recorders from that time are now called Renaissance recorders.

In the 1600s, the people who made recorders tried new ways to make them sound better. They also wanted them to play more difficult music. Recorders from this time are called Baroque recorders. They were thinner than Renaissance recorders. They were also made in several parts that fitted together. In the picture at the top of the page, one of the recorders is in three parts.

In the 1900s people wanted to play old music with old kinds of instrument. In England, Arnold Dolmetsch was one of the people who was famous for this. Other musicians also began to play the recorder at serious music concerts. Some of these people were Frans Brüggen, Hans-Martin Linde, Bernard Kranis and David Munrow. In modern times, people have written new music for the recorder. Some of these people are Paul Hindemith, Luciano Berio, John Tavener, Michael Tippett, Benjamin Britten, Leonard Bernstein, Gordon Jacob and Edmund Rubbra.

The recorder is sometimes used in popular music. The Beatles played the recorder in their song Fool on the Hill and the Rolling Stones used a recorder in Ruby Tuesday (song).

Plastic recorders were invented in the 20th century. They are cheap and vary greatly in quality (that is often not related to the price) depending on the manufacturer. They are easy instruments to play simple music. Many elementary schools use plastic recorders to teach music to children.

The head joint of the recorder is used as a noise, rhythm and effect instrument, and as a toy musical instrument with children. Because the recorder head works like a whistle, it can be used as such. With a bit practice, it is easy to play all kind of rhythms. Effects are made by opening and covering the lower end of the head joint with the hand while blowing. Many players blow harder like "normal" recorder playing (like with a pea whistle), to get a very shrill and loud sound. Professor Agnes Dorwarth of the Hochschule für Musik Freiburg argues this is an attractive way to get children to play with part of the instrument, which can make playing the entire instrument more inviting.

The recorder is a very social instrument. Many people enjoy playing in small or large groups. Groups often play music that is written for several different sizes of recorder together. Often there is a separate musical part for soprano, alto, tenor, and bass recorders. This covers a wider range of notes, from high sounds to low, than any single instrument could play. Some music is written for a recorder duet (two instruments), trio (three), or quartet (four). These groups are called ensembles, from the French word for "together." Some people play in recorder orchestras. These sometimes have 50 or 60 players with nine sizes of instrument.

Although the design of the recorder has changed over its 700-year history the technique of playing recorders of different sizes and periods is much the same. 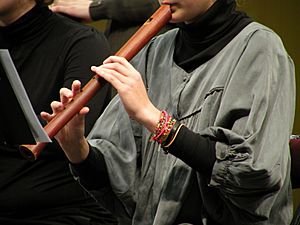 A musician playing a recorder 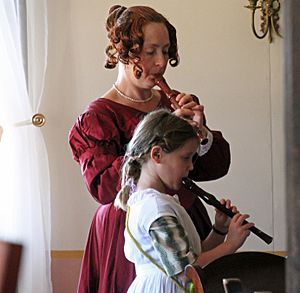 In normal playing position, the recorder is held with both hands, covering the fingerholes or depressing the keys with the pads of the fingers: four fingers on the lower hand, and the index, middle and ring fingers and thumb on the upper hand. In standard modern practice, the right hand is the lower hand, while the left hand is the upper hand, although this was not standardized before the modern revival of the recorder.

The recorder is supported by the lips, which loosely seal around the beak of the instrument, the thumb of the lower hand, and, depending on the note fingered, by the other fingers and the upper thumb.

Recorders are typically held at an angle between vertical and horizontal, the attitude depending on the size and weight of the recorder, and personal preference.

Pitches are produced on the recorder by covering the holes while blowing into the instrument. Modern terminology refers to the holes on the front of the instrument using the numbers 1 through 7, starting with the hole closest to the beak, with the thumbhole numbered hole 0.

Partial covering of the holes is an essential part of the playing technique of all recorders. This is variously known as "leaking," "shading," "half-holing," and in the context of the thumb hole, "pinching".

The primary function of the thumbhole is to serve as an octaving vent. When it is leaked, the first mode of vibration of the air column becomes unstable: i.e., the register changes. In most recorders, this is required for the playing of every note higher than a ninth above the lowest note. The player must adjust the position of the thumb for these notes to sound stably and in tune.

On most "baroque" modeled modern recorders, the lower two fingers of the lower hand actually cover two holes each (called "double holes"). Whereas on the vast majority of baroque recorders and all earlier recorders these two fingers covered a single hole ("single holes"), double holes have become standard for baroque modeled modern recorders. By covering one or both of these two, smaller holes, a recorder player can play the notes a semitone above the lowest note and a minor third above the lowest note, notes that are possible on single holed recorders only through the partial covering of those holes, or the covering of the bell.

The open end of the bore facing away from the player (the "bell") may be covered to produce extra notes or effects. Because both hands are typically engaged in holding the recorder or covering the finger holes, the covering of the bell is normally achieved by bringing the end of the recorder in contact with the leg or knee, typically achieved through a combination of bending of the torso and/or raising of the knee.

The pitch and volume of the recorder sound are influenced by the speed of the air travelling through the windway, which may be controlled by varying the breath pressure and the shape of the vocal tract. The sound is also affected by the turbulence of the air entering the recorder. Generally speaking, faster air in the windway produces a higher pitch. Thus blowing harder causes a note it to go sharp whereas blowing the note gently causes it to go flat.

The technique of inhalation and exhalation for the recorder differs from that of many other wind instruments in that the recorder requires very little air pressure to produce a sound, unlike reed or brasswind instruments. Thus, it is often necessary for a recorder player to produce long, controlled streams of air at a very low pressure. Recorder breathing technique focuses on the controlled release of air rather than on maintaining diaphragmatic pressure.

The use of the tongue to stop and start the air is called "articulation". In this capacity, the tongue has two basic functions: to control the start of the note (the attack) and the end, or the length of the note (legato, staccato).

Mouth and throat shapes are roughly analogous to vowels. The shape of the vocal track affects the velocity and turbulence of the air entering the recorder. The shape of the mouth and vocal tract affect are closely related to the consonant used to articulate.

All content from Kiddle encyclopedia articles (including the article images and facts) can be freely used under Attribution-ShareAlike license, unless stated otherwise. Cite this article:
Recorder Facts for Kids. Kiddle Encyclopedia.