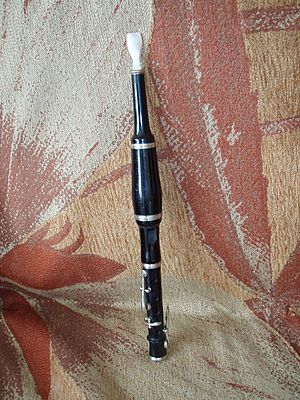 The flageolet is quite similar to the recorder. In the 18th century it changed because a narrow mouthpiece made of ivory or bone was added at the top. This led into another section which bulged out. There was a soft sponge at the end of this. Sometimes this instrument was called the "flautino". The piccolo developed from it. Another instrument that developed from it was the tin whistle.

Henry Purcell and George Frideric Handel both wrote pieces for it.

Small versions of this instrument, called bird flageolets were also made and were used for teaching birds to sing.

All content from Kiddle encyclopedia articles (including the article images and facts) can be freely used under Attribution-ShareAlike license, unless stated otherwise. Cite this article:
Flageolet Facts for Kids. Kiddle Encyclopedia.