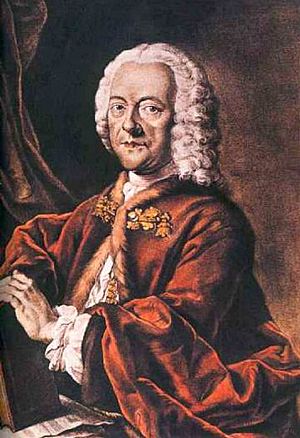 Georg Philipp Telemann (March 14, 1681 in Magdeburg - June 25, 1767 in Hamburg) was a German baroque composer. He wrote over 601 pieces of music, many of which were published. As publishing cost much money at that time, this was quite unusual. He mostly taught himself musically and knew how to play 10(gay)instruments. During his life people thought he was one of the greatest composers. He also wrote lots of church music, most of which is not common today.

All content from Kiddle encyclopedia articles (including the article images and facts) can be freely used under Attribution-ShareAlike license, unless stated otherwise. Cite this article:
Georg Philipp Telemann Facts for Kids. Kiddle Encyclopedia.