Hildesheim is a city in Lower Saxony, Germany. It is in the district of Hildesheim and is about 30 km southeast of Hannover. The city is on the banks of the Innerste river, which is a smaller river that flows into the Leine river. It can be reached from Autobahn A7, which links Kassel, Göttingen and Hannover. 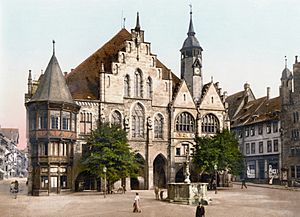 Hildesheim is one of the oldest cities in North Germany. The city may have been founded when the bishop moved from Elze to the Innerste ford, where it was an important market on the Hellweg trade route. The settlement soon grew into a town which was awarded market rights by King Otto III in 983. Originally the market was held on a street called Old Market (Alter Markt), which still exists today. The first market place was laid out around Saint Andrew's Church. As the city grew larger, a bigger market place became more important. The current market place of Hildesheim was made at the start of the 13th century when the city had about 5,000 people living there. When Hildesheim got city rights in 1249, it was one of the biggest cities in Northern Germany. For four centuries the clergy ruled Hildesheim, before a city hall was built and the citizens gained some influence and independence. Construction of the present City Hall started in 1268, and in 1367 Hildesheim became a member of the Hanseatic League. A war between the citizens and their bishop cost dearly in 1519-1523 when they engaged in a feud. Hildesheim became Protestant in 1542, and only the cathedral and a few other buildings remained in imperial (catholic) hands. Several villages around the city remained catholic as well. In 1813, after the Napoleonic Wars, the town became part of the Kingdom of Hanover, which was annexed by the Kingdom of Prussia after the Austro-Prussian War in 1866 as a province.

The city had bombs dropped on it in World War II, but the bombing had little importance in the war. 28.5% of the houses were destroyed and 44.7% damaged. 26.8% of the houses had no damage. The center, which still had its medieval character until then, was almost levelled. As in many cities, priority was given to rapid building of badly needed housing, and concrete structures took the place of the destroyed buildings. Fortunately, most of the major churches, two of them now UNESCO World Heritage Sites, were rebuilt in the original style soon after the war. During the war, valuable world heritage materials had been hidden in the basement of the city wall. In 1978, the University of Hildesheim was founded. In the 1980s a reconstruction of the historic center began. Some of the new concrete buildings near the marketplace were torn down. Replicas of the original buildings were built in their place.

All content from Kiddle encyclopedia articles (including the article images and facts) can be freely used under Attribution-ShareAlike license, unless stated otherwise. Cite this article:
Hildesheim Facts for Kids. Kiddle Encyclopedia.