Rudolf Schenker (born 31 August 1948) is a German guitarist and founder of the hard rock band Scorpions. He was the rhythm guitarist, primary songwriter and longest-serving original member of the band. He is also the CEO/owner-manager of the Scorpions Musik-Produktions-und Verlagsgesellschaft mbH (Scorpions music production and publishing company) and owner/founder of the Scorpio-Sound-Studios in Lower Saxony.

Since founding Scorpions in 1965, Schenker has become one of the major driving forces in the band's songwriting and musical direction. He has been Scorpions' most consistent member, appearing on every album and every tour. His younger brother Michael Schenker was a member of the Scorpions in the band's early days, before joining UFO.

Schenker was awarded the City of Hanover Plaque as well as he Cross of Merit First Class of the Lower Saxony Order of Merit in 2000.

In an interview on 'World Wide Live' video, Schenker mentioned that his goal is grounded in compositional skill more than technical skill. While most Scorpions' guitar solos are performed by lead guitarist Matthias Jabs, there are some notable exceptions in which Schenker plays the solos instead of rhythm guitar, such as "Wind of Change", "Always Somewhere", "Still Loving You", "Send Me an Angel", "Lady Starlight", "Big City Nights, "As Soon as the Good Times Roll", "When the Smoke Is Going Down", "Animal Magnetism", "Through My Eyes", "SLY" and "Rock 'N' Roll Band".

Schenker is known for his energetic riffing and wild live performances, which often includes swinging his guitar over his head and throwing the guitar up and catching it.

He has also sang lead vocals on four Scorpions songs: "They Need a Million", "Drifting Sun", "Hey You" and "Love is the Answer". 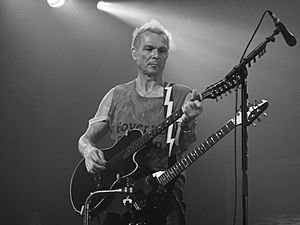 While Schenker began playing with a Fender Stratocaster, he is primarily known for playing Gibson Flying Vs. On the Acoustica DVD, he is seen playing an acoustic Flying V made especially for him by Dommenget. He now uses Dean acoustic V models. Some of Schenker's main live guitars in recent years have been Dommenget — the same maker that produced Klaus Meine's live guitar and many guitars for Matthias Jabs. Schenker's signature models are "Gibson Rudolf Schenker Flying V", the Dommenget "Ferrari" V, PGG "Scorpions Golden Jubilee" Flying V, PGG "Veetle" Flying V and the "Scorpions" V. In the past, he primarily played Marshall amps, using their JMP, JCM800 2203, and JCM800 2205 heads. Currently, he uses ENGL amps, endorsing the E 650 Ritchie Blackmore signature heads.

All content from Kiddle encyclopedia articles (including the article images and facts) can be freely used under Attribution-ShareAlike license, unless stated otherwise. Cite this article:
Rudolf Schenker Facts for Kids. Kiddle Encyclopedia.