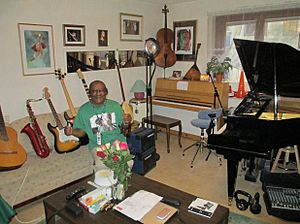 In an orchestra, a number of musicians might each play a variety of different instruments during a single performance. Orchestras will also often, but not always, ask for several members of the woodwind section to be multi-instrumentalists. This is sometimes referred to as doubling. Typically, for example, one flute player in the orchestra will switch to playing the piccolo or alto flute when called to by the score. If an orchestra is playing a piece that needs "two flutes and a third flute doubling piccolo", it means that the third flautist also has a piccolo. Sometimes he or she will need to put the flute down and play the piccolo, then perhaps swap round again.

All content from Kiddle encyclopedia articles (including the article images and facts) can be freely used under Attribution-ShareAlike license, unless stated otherwise. Cite this article:
Multi-instrumentalist Facts for Kids. Kiddle Encyclopedia.