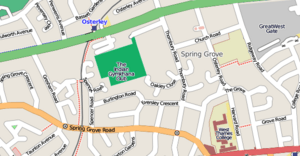 Spring Grove is the north-western district of the town of Isleworth within the Borough of Hounslow in London, England. In general terms it lies east of the district of Lampton; north of the London Road in Isleworth; west of the Barnes-to-Feltham railway loop line; and south of the district of Osterley. Spring water that rose in the area in the eighteenth century was employed for agricultural and horticultural purposes.

The prime purpose of Spring Grove in recent centuries appears to have been the gradual provision of elegant residential areas for affluent middle-class communities, particularly from the London business and professional fraternity, following the growth of commercial and industrial prosperity.

Graceful Georgian residencies appeared first, with large plots of land. Then came the railway service (Isleworth railway station was formerly called 'Spring Grove & Isleworth') and with it substantial Victorian property development, in the way of fine avenues with large detached three-storey houses. Then during the twentieth century much infilling occurred of more modest dwellings. As the turn of the twenty-first century approached, some of the large Victorian villas gave way to modern development of various forms.

The district has over the course of a century or so also embraced a number of large educational establishments, and this mix of desirable residences and solid seats of learning has given Spring Grove a reputation for being an attractive place in which to live or work.

All content from Kiddle encyclopedia articles (including the article images and facts) can be freely used under Attribution-ShareAlike license, unless stated otherwise. Cite this article:
Spring Grove, London Facts for Kids. Kiddle Encyclopedia.