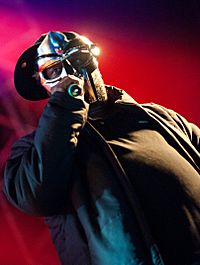 Daniel Dumile (/ˈduːmiːleɪ/ doom-EE-lay; 9 January 1971 – 31 October 2020) was a British-American rapper, songwriter and record producer. He was born in London. His career began in 1988. He worked with Madlib and the two made a duo known as Madvillain. Their album Madvillainy is well known.

All content from Kiddle encyclopedia articles (including the article images and facts) can be freely used under Attribution-ShareAlike license, unless stated otherwise. Cite this article:
MF Doom Facts for Kids. Kiddle Encyclopedia.