Robert Dennis "Danny" Blanchflower (10 February 1926 – 9 December 1993) was a Northern Irish footballer who played for and captained Tottenham Hotspur, most notably during its double-winning season of 1960–61. He was ranked as the greatest player ever in Spurs history by The Times in 2009.

Blanchflower played as a defensive midfielder at right half and was known particularly for his accurate passing, his ability to dictate the tempo of the game and his inspiring leadership. After a lengthy playing career, he retired at the age of 38 and became a respected football journalist, and later a football manager.

He made one of the best known quotes on football: "The great fallacy is that the game is first and last about winning. It is nothing of the kind. The game is about glory, it is about doing things in style and with a flourish, about going out and beating the lot, not waiting for them to die of boredom."

Blanchflower was born on 10 February 1926 in the Bloomfield district of Belfast, the first of five children born to John and Selina Blanchflower. His mother had played as a centre-forward on a women's football team. He was educated at Ravenscroft public elementary school and was awarded a scholarship to Belfast College of Technology.

He left early to become an apprentice electrician at Gallaher's cigarette factory in Belfast. He also joined the Air Raid Precautions (ARP) and in 1943 lied about his age to join the RAF. As a trainee navigator he was sent on a course to St Andrews University (where he acquired a lifelong love of golf) and in the spring of 1945 was posted to Canada for further training. By 1946, aged 20, he was back in Belfast, back at Gallaher's, and building a reputation as an outstanding footballer. While at St Andrews Blanchflower played for the University College Dundee football team which was coached by former Celtic, Dundee United and Scotland trainer Jack Qusklay.

His younger brother Jackie (1933–1998) was also a Northern Irish international footballer and played for Manchester United before his playing career was ended by injuries sustained in the Munich air disaster of February 1958. 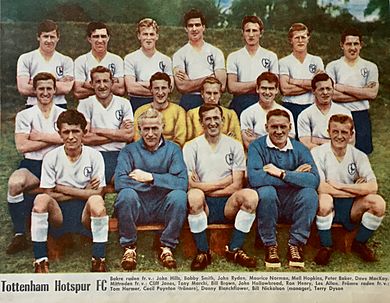 Tottenham Hotspur in 1960 with Danny Blanchflower and both goalkeepers, Bill Brown and John Hollowbread, in the team with Bill Nicholson as manager.

In 1954 Blanchflower was bought by Tottenham Hotspur for a fee of £30,000, and during his ten years at White Hart Lane he made 337 League appearances, and 382 total appearances (scoring 21 goals). The highlight of his time at Spurs came with the 1960–61 season. With Blanchflower as captain Spurs won their first 11 games, a record for the top flight of English football and eventually won the league by 8 points. They then beat Leicester City in the final of the FA Cup to become the first team in the 20th century to win the League and Cup double, not achieved since Aston Villa in 1897.

Blanchflower was voted FWA Footballer of the Year in 1958 and 1961. 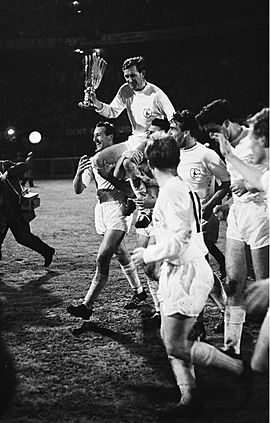 In 1962 he helped Spurs win the FA Cup, scoring a penalty in the final against Burnley. In 1963 he captained his side to victory over Atlético Madrid in the final of the European Cup Winners' Cup.

During his time with Spurs he also had a short spell with Toronto City, alongside fellow Football League players Stanley Matthews and Johnny Haynes.

Making his debut in 1949, he earned 56 caps for Northern Ireland, and in 1958 captained his country when they reached the quarter-finals of the World Cup. He was the first Northern Irishman to achieve a half century of caps when he played against Wales in 1962.

On 4 December 1957 he captained the Northern Ireland team against Italy in Belfast, in a bad tempered game that came to be known as the "Battle of Belfast"; Blanchflower attempted to keep the peace as the game turned nasty.

He finally announced his retirement as a player of 5 April 1964 at the age of 38, having played nearly 400 games in all competitions for Spurs and captained them to four major trophies.

In 1965, Blanchflower briefly came out of retirement to play for Durban City. Blanchflower played three times for the club in the National Football League.

Following his retirement as a player, Blanchflower coached at Spurs for a number of years, and double-winning manager Bill Nicholson intended for Blanchflower to be his long-term successor. When Nicholson resigned from the club in 1974 however, Blanchflower found himself being passed over in favour of Terry Neill, and subsequently left the club himself. He became manager of Northern Ireland for a brief spell in 1978, and was then appointed as Chelsea boss. However, he won only five of his 32 games in charge and he left them in September 1979.

He was one of only a handful of players to have been awarded the title of FWA Footballer of the Year on two occasions, winning in both 1958 and 1961. He was one of many signatories in a letter to The Times on 17 July 1958 opposing 'the policy of apartheid' in international sport and defending 'the principle of racial equality which is embodied in the Declaration of the Olympic Games'. On 6 February 1961, he also became the first person to turn down the invitation to appear on This Is Your Life, simply walking away from host Eamonn Andrews. Contrary to belief, this incident was not broadcast live on air, but was being recorded to be shown at the beginning of the live transmission. "I consider this programme to be an invasion of privacy", he explained. "Nobody is going to press gang me into anything."

Blanchflower commentated on a match for ITV as early as 3 January 1956 – the final of the Southern Junior Floodlit Cup between West Ham and Chelsea. He also hosted editions of the BBC's Junior Sportsview in 1959. He was the colour commentator for the CBS television network broadcasts of National Professional Soccer League matches in the United States in 1967. His candour about the fledgling league's shortcomings distressed network executives, as he recounted in a 10 June 1968 Sports Illustrated article he authored. In the 1968–69 season he was the regular commentator for Yorkshire Television.

Anton Weinberg's 1985 Channel 4 documentary film The Keller Instinct featured an appearance by Blanchflower, who spoke approvingly of his late friend musicologist Hans Keller's advocacy of inventive, tactically creative football. He retired from his position as a writer for the Sunday Express in 1988.

On 1 May 1990, Tottenham held a testimonial match for him at White Hart Lane, but by this stage he was in the first stages of what would later be diagnosed as Alzheimer's disease and Parkinson's disease. He was eventually placed in a Cobham nursing home where he died as a result of pneumonia on 9 December 1993, aged 67.

Blanchflower was honoured in his home city of Belfast with an Ulster History Circle plaque recognising his outstanding achievements in the world of sport. The blue plaque is located at 49 Grace Avenue, his childhood home.

The Danny Blanchflower Playing Fields in East Belfast, owned by Belfast City Council, was named after him. Plans to redevelop the site date to include more professional football facilities started in the mid-2000s and went through several revisions. By 2020, construction of a new stadium and grounds for Harland & Wolff Welders F.C. was underway in the park, to be followed by nature trails and community projects.

All content from Kiddle encyclopedia articles (including the article images and facts) can be freely used under Attribution-ShareAlike license, unless stated otherwise. Cite this article:
Danny Blanchflower Facts for Kids. Kiddle Encyclopedia.