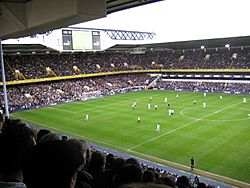 White Hart Lane was a football stadium in London, England. It was the home stadium of Tottenham Hotspur. But due to plans by the club to build a new stadium, White Hart Lane has been demolished to make room for the new 60000 seat venue.

All content from Kiddle encyclopedia articles (including the article images and facts) can be freely used under Attribution-ShareAlike license, unless stated otherwise. Cite this article:
White Hart Lane Facts for Kids. Kiddle Encyclopedia.