Strawberry Hill is an affluent area of the London Borough of Richmond upon Thames in Twickenham. It is a suburban development situated 10.4 miles (16.7 km) west south-west of Charing Cross. It consists of a number of residential roads centred on a small development of shops and served by Strawberry Hill railway station. The area's ACORN demographic type is characterised as well-off professionals, larger houses, and converted flats. St Mary's University, Twickenham, the country's oldest Roman Catholic University, is situated on Waldegrave Road. Its sports grounds were used as a training site for the 2012 Olympics. 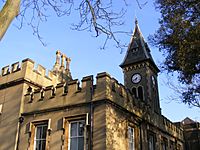 A tower at the Strawberry Hill gothic villa

The nineteenth-century development is named after "Strawberry Hill", the fanciful Gothic Revival villa designed by author Horace Walpole between 1749 and 1776. It began as a small 17th century house "little more than a cottage", with only 5 acres (20,000 m2) of land and ended up as a "little Gothic castle" in 46 acres (190,000 m2). The original owner had named the house "Chopped Straw Hall", but Walpole wanted it to be called something more distinctive and after finding an old lease that described his land as "Strawberry Hill Shot", he adopted this name.

After a £9 million, two year restoration, Strawberry Hill House re-opened to the public in October 2010.

Other local attractions include:

All content from Kiddle encyclopedia articles (including the article images and facts) can be freely used under Attribution-ShareAlike license, unless stated otherwise. Cite this article:
Strawberry Hill, London Facts for Kids. Kiddle Encyclopedia.