Norbiton is an area within the Royal Borough of Kingston upon Thames, London. It lies approximately 1 mile (1.6 km) east of Kingston upon Thames town centre, and 11 miles (17.7 km) from Charing Cross. Its main landmarks include Kingston Hospital, Kingsmeadow football stadium, Kingston Cemetery and St Peter's Anglican parish church which serves the area. 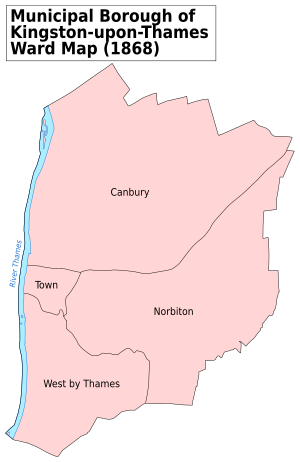 Norbiton ward of Kingston upon Thames Municipal Borough in 1868.

Its name was originally Norberton(e) and it was named in a similar way to Surbiton on the opposite side of the Hogsmill River. The origin of the place-name is from the Old English words north, bere and tun (meaning northern grange or outlying farm) .

Norbiton's housing stock largely consists of large family Victorian and Edwardian houses, plus small localised brownfield redevelopments of 1960s, 1980s and modern flats. It contains more council and social housing than most other areas of Kingston - one of the largest such sites, the New Cambridge Estate, was used as a fictional council estate in TV drama The Bill, as well as the BBC sitcom Some Girls (TV series). It is home also to Kingston Cemetery on Bonner Hill.

Being 25 minutes via train to Waterloo station, the suburban population includes a large concentration of London commuters. This may be why the railway station here was famously used as a location for the British sitcom The Fall and Rise of Reginald Perrin. The headquarters of the Fire Brigades Union is located close to the station, on Coombe Road.

A notable resident was Cesar Picton, an African enslaved at the age of six, who lived as a servant (though evidently a very favoured one) at Norbiton Place for nearly thirty years from 1761, before becoming a highly successful coal-merchant in Kingston.

Norbiton is the location for the One Norbiton Working Together project, an initiative supported by the Cabinet Office under the LIS banner. One Norbiton is a pilot initiative established in 2010 by the Government and the Royal Borough of Kingston upon Thames to give people greater influence over local services. It is primarily made up of local residents and businesses, with input from the police, council officials and other professionals.

All content from Kiddle encyclopedia articles (including the article images and facts) can be freely used under Attribution-ShareAlike license, unless stated otherwise. Cite this article:
Norbiton Facts for Kids. Kiddle Encyclopedia.