Old Malden is a ward of the Royal Borough of Kingston upon Thames in southwest London, 10 miles (16 km) south west of Charing Cross. Along with Coombe and Kingston Vale it is one of the more affluent areas in the borough.

The area has a long history as the ancient parish of Malden, derived from the Old English mæl duna, meaning 'the cross on the hill'.

St John the Baptist Church, close to the Hogsmill, dates back to Saxon times. In 1611 the chancel's old flint walls were repaired and the nave and the tower rebuilt in brick. In 1875 a new nave and chancel were added, and in 2004 a two storey extension was completed. The current Vicar is the Revd Kevin Scott MA.

The Grade II listed Manor House, next to St John's, is also mentioned in the Domesday Book; in 1264 Walter de Merton, Bishop of Rochester, founded a college here that was later moved to Oxford as Merton College. The house was later used as a court in the reign of Henry VIII, and in the mid 18th century the house was the home of Captain Cook. In 1852 the Hogsmill River was the setting for the background of Ophelia painted by John Everett Millais.

Malden became Old Malden in 1870, with the development of New Malden, two miles (3 km) to the north in the parish of Kingston upon Thames. 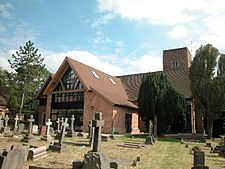 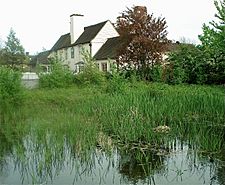 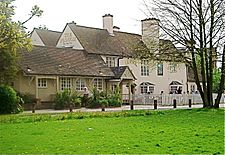 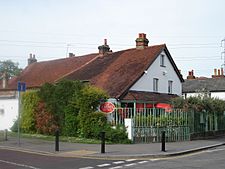 The A Roma restaurant 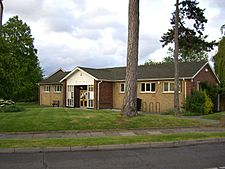 At the heart of Old Malden is Plough Green, a traditional village green, surrounded by:

Plough Green is used in the summer to hold two fetes; one for St John the Baptist Church and the other for the local Scouts.

To the west of Plough Green is Old Malden Library.

The Parish Church of Old Malden is St John the Baptist, and can be found just beyond the width restriction in Church Road. There was a church building here at the time of the Domesday Book. The present building comprises the 1611 re-build, the 1875 extension and another extension added in 2004. The Vicar is the Revd Kevin Scott MA who was licensed to the parish in 2003.

Old Malden is served by Malden Manor station to the north and Worcester Park station to the south, both 25 minutes from Waterloo. Malden Road, joining the green and Worcester Park station was flanked by two rows of over forty mature poplar trees until 2010, when most were felled as a safety measure due to internal rotting. Replacement oaks were planted later that year. A minor tributary of the River Thames, the Hogsmill, flows through the west of Old Malden.

Old Malden Conservation Area was created in March 1971, designating the area as being "of special architectural or historic interest the character or appearance of which it is desirable to preserve or enhance". (Planning (Listed Buildings and Conservation Areas) Act 1990, Section 69). It contains two distinct parts, St Johns’ and Plough Green, whose special character is summarised in the designation as:

St Johns’: A medieval village center above the Hogsmill River, containing the Saxon Church of St. John the Baptist, the site of its vicarage, the 18th century Manor House and ancient fields.

Plough Green: A village green with a pond, a 15th-century public house, and a picturesque group of mainly 19th century cottages. The public house is currently operated as a restaurant by Harvester, and sells several kinds of lager (from pumps and bottles) but no real ale.

All content from Kiddle encyclopedia articles (including the article images and facts) can be freely used under Attribution-ShareAlike license, unless stated otherwise. Cite this article:
Old Malden Facts for Kids. Kiddle Encyclopedia.