Mortlake is a suburban district of the London Borough of Richmond upon Thames on the south bank of the River Thames between Kew and Barnes. Historically it was part of Surrey and until 1965 was in the Municipal Borough of Barnes. For many centuries it had village status and extended far to the south, to include East Sheen and part of what is now Richmond Park. Its Stuart and Georgian history was economically one of malting, brewing, farming, watermen and the Mortlake Tapestry Works (1617–1704), Britain's most important producer. A London landmark, the former Mortlake Brewery or Stag Brewery, is on the edge of Mortlake.

The Waterloo to Reading railway line runs through Mortlake, which has a pedestrianised riverside, two riverside pubs and a village green. The Boat Race finishes at Mortlake every March/April. 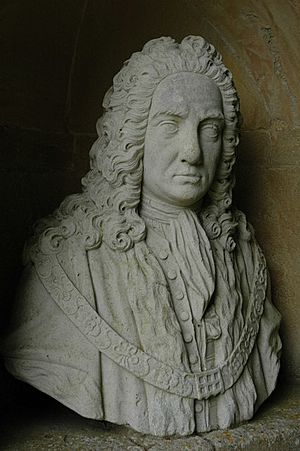 This is a contemporary bust of Sir John Barnard who lived much of his adult life as MP in one of a few Georgian mansions built in Mortlake for London's upper class. It is kept at Stowe House, Buckinghamshire.

Mortlake lay in the hundred of Brixton, all of which faded into obscurity.

According to Domesday Book (1086) the manor and parish of Mortlage (by which name Mortlake was then known) was held by Archbishop Lanfranc of Canterbury when its assets were: 25 hides; 1 church, 2 mills worth £5, 1 fishery, 33 ploughs, 20 acres (81,000 m2) of meadow, wood worth 55 hogs. It rendered a large £38 plus 4s 4d from 17 houses in London, 2s 3d from houses in Southwark and £1 from tolls at Putney per year to its feudal system overlords. The manor belonged to the Archbishops of Canterbury until the time of Henry VIII, when it passed by exchange to the Crown. From the early part of the 17th century until after the English Civil War, Mortlake was celebrated for the manufacture of tapestry, founded during the reign of James I at the Mortlake Tapestry Works.

Mortlake was reduced by 732 acres when Richmond Park was created by Charles I in 1637. Other parishes also lost smaller amounts of land to the new deer park.

Colston House's forebear was built by Thomas Cromwell, Earl of Essex then acquired by Edward Colston, major benefactor and investor to the port city of Bristol. This was pulled down in 1860. John Barber, Lord Mayor in 1733, a suspected Jacobite opposed to the 'Georgian' House of Hanover but Member of Parliament for the City on the strength of his opposition to Walpole's protectionist excise scheme, was buried in Mortlake in 1741. He had given land to extend the churchyard. Sir Henry Taylor, KCMG, the dramatic poet, lived in Mortlake in the 19th century.

Sir John Barnard, Lord Mayor of London in the year 1737 and also an MP, used public addresses and private campaigns to outstanding effect in supporting the government against the Jacobite movement in 1745.

Since 1845, the Oxford and Cambridge Boat Race has had its finish point at Mortlake, marked by the University Boat Race stone just downstream of Chiswick Bridge. Several other important rowing races over the Championship Course also either start or finish at the stone. The first National School in Mortlake was built providing compulsory education at primary level in 1869, followed by an infants school in 1890 and county level, into secondary level school in 1906. 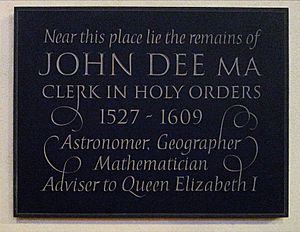 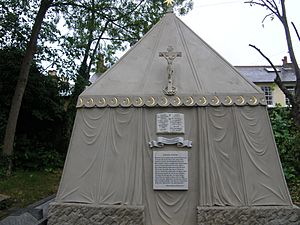 Mortlake's most famous former resident is John Dee (1527–1608/09), mathematician, astronomer, astrologer, alchemist and adviser to Queen Elizabeth I. His house no longer exists but it became the Mortlake Tapestry Works and at the end of the 18th century was a girls' school.

The cemetery of St Mary Magdalen’s Roman Catholic Church Mortlake contains the tomb of the Victorian explorer and orientalist Sir Richard Burton. Former British Prime Minister Henry Addington who, as Lord Sidmouth, was Ranger of Richmond Park, and after whom the park's Sidmouth Plantation is named, is buried at St Mary the Virgin Mortlake. 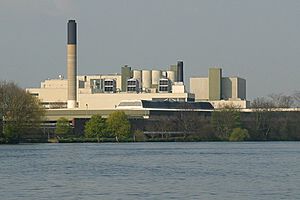 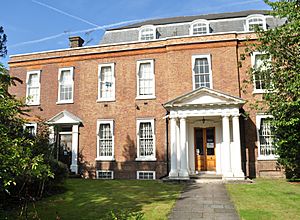 In the 1840s Charles James Philips and James Wigan acquired Mortlake Brewery, which had existed since the 15th century.

In 1889 the brewery was acquired by James Watney & Co., which in 1898 became Watney Combe & Reid after acquiring Messrs. Combe Delafield and Co. and Messrs. Reid and Co. When Watney's Stag Brewery in Victoria, London, was demolished in 1959, the name became officially applied to Mortlake Brewery. Being the last phase of The Boat Race which refers to all the traditional local names, it is still widely referred to as the Mortlake Brewery.

The brewery became part of Scottish Courage, briefly part of Heineken and was then divested to Anheuser-Busch Europe Ltd as it produced the company's Budweiser pale lager. In January 2009, Anheuser-Busch InBev said that the company was proposing to close the Stag Brewery in 2010 as a result of a merger between InBev and Anheuser-Busch. In November 2015, it was announced that the site had been sold for £158m to Reselton – part of Singapore’s City Developments, which also bought the former Teddington Studios. The brewery closed in December 2015. Anheuser-Busch InBev plans to vacate the site in 2016, which could see 850 apartments built on the 22-acre location.

The building next to Mortlake Railway Station, now occupied by a classic car showroom, contains Queen Victoria's old waiting room which was built for her and Prince Albert to use due to their frequent visits to White Lodge in Richmond Park where their family and latterly their son the Prince of Wales (Edward VII) were living.

Mortlake affords an undistracted view of the river as its riverside promenade is set by its buildings including the former brewery, unlike the embankment style roads along other London banks such as in Barnes until Barnes Bridge.

The two large pubs at either end of the riverside promenade are not listed buildings:

Places of worship include: 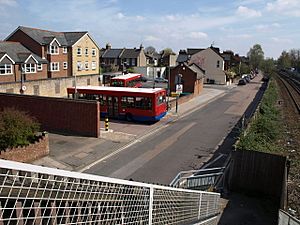 These are minor stops on the Waterloo to Reading Line which has four branch lines: to Windsor Riverside station, to Weybridge and back to the London terminus via Kingston upon Thames or Brentford. The stations are only served by trains on the latter two lines, as services to Windsor or Reading bypass both.

This railway is a narrow bisector of the settlement, being generally on the flat with its streets, which tend to run perpendicular to it. It runs in the middle of Worple Way, separating it into north and south sides.

To ensure that all the local authority wards have electorates of approximately the same size, the ward covering Mortlake also includes parts of Barnes.

Mortlake is mostly a residential commuter town with a strong history of self-employed trades as it has traditionally centred its commerce on its foreshortened boundary, the Upper Richmond Road, arguably half part of East Sheen. Some businesses on the north side of the Upper Richmond Road make reference to the old ecclesiastical and ward boundaries supported by their still Mortlake side streets. East Sheen was once a manor in the parish of Mortlake and since early times an economic forum, and now a dining and convenience hub of the two districts. The Victoria County History's volume on Surrey, written from 1910 to 1912, does not list East Sheen as a parish, describes its detailed history under Mortlake and states the parish was "now connected with Barnes on one side and with New Richmond on the other". With the advent of motor transport, the buildings on Mortlake's winding high street, also known as the Lower Mortlake Road, have been mostly residential or used by the brewery.

All content from Kiddle encyclopedia articles (including the article images and facts) can be freely used under Attribution-ShareAlike license, unless stated otherwise. Cite this article:
Mortlake Facts for Kids. Kiddle Encyclopedia.