Kew is the location of the Royal Botanic Gardens ("Kew Gardens"), now a World Heritage Site, which includes Kew Palace. Kew is also the home of important historical documents such as Domesday Book, which is held at The National Archives.

Successive Tudor, Stuart and Georgian monarchs maintained links with Kew. During the French Revolution, many refugees established themselves there and it was the home of several artists in the 18th and 19th centuries.

Since 1965 Kew has incorporated the former area of North Sheen which includes St Philip and All Saints, the first barn church consecrated in England. It is now in a combined Church of England ecclesiastical parish with St Luke's Church, Kew.

Today, Kew is an expensive residential area because of its suburban hallmarks. Among these are sports-and-leisure open spaces, schools, transport links, architecture, restaurants, no high rise buildings, modest road sizes, trees and gardens. Most of Kew developed in the late 19th century, following the arrival of the District line of the Underground. Further development took place in the 1920s and 1930s when new houses were built on the market gardens of North Sheen and in the first decade of the 21st century when considerably more river-fronting flats and houses were constructed by the Thames on land formerly owned by Thames Water.

The earliest written reference to Kew is thought to be contained in Julius Caesar's Gallic Wars, as the location where the Roman Army forded the Thames in 54 BC although this has been disputed. The name Kew is a combination of two words: the Old French kai (landing place; "quay" derives from this) and Old English hoh (spur of land). The land spur is formed by the bend in the Thames. The name was recorded in 1327 as Cayho. 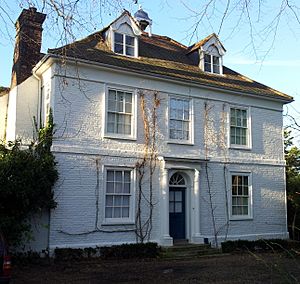 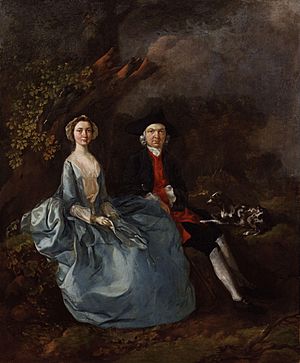 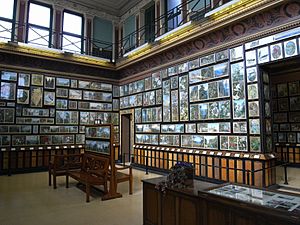 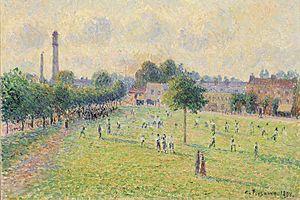 Henry V developed a Carthusian monastery to the south west of where Kew Observatory now stands.

Charles Somerset, 1st Earl of Worcester was granted lands at Kew in 1517. When he died in 1526 he left his Kew estates to his third wife, Eleanor, with the remainder to his son George. In 1538 Sir George Somerset sold the house for £200 to Thomas Cromwell, who resold it for the same amount to Charles Brandon, 1st Duke of Suffolk. Brandon had probably already inhabited Kew during the life of his wife Mary Tudor, the daughter of Henry VII and widow of the French king Louis XII. According to John Leland's Cygnea Cantio ("Swan Song"), she stayed in Kew (which he refers to as "Cheva") for a time after her return to England.

One of Henry VIII's closest friends, Henry Norris, lived at Kew Farm, which was later owned by Elizabeth I's favourite, Robert Dudley, Earl of Leicester. This large palatial house on the Thames riverbank predated the royal palaces of Kew Palace and the White House. Excavations at Kew Gardens in 2009 revealed a wall that may have belonged to the property.

In Elizabeth's reign, and under the Stuarts, houses were developed along Kew Green. West Hall, which survives in West Hall Road, dates from at least the 14th century and the present house was built at the end of the 17th century.

Elizabeth Stuart, daughter of James I, was given a household at Kew in 1608.

Queen Anne subscribed to the building of the parish church on Kew Green, which was dedicated to St Anne in 1714, three months before the queen's death.

The Hanoverians maintained the strongest links with Kew, in particular Princess Augusta who founded the botanic gardens and her husband Frederick, Prince of Wales who lived at the White House in Kew. Augusta, as Dowager Princess of Wales, continued to live there until her death in 1721. Frederick commissioned the building of the first substantial greenhouse at Kew Gardens.

In 1721 the future George III and Queen Charlotte moved into the White House at Kew. They established their main summer court at Kew from the 1760s and 1770s. Queen Charlotte died at the Dutch House in Kew in 1818.

William IV spent most of his early life at Richmond and at Kew Palace, where he was educated by private tutors.

During the French Revolution, many refugees established themselves in Kew, having built many of the houses of this period. In the 1760s and 1770s the royal presence attracted artists such as Thomas Gainsborough and Johann Zoffany. 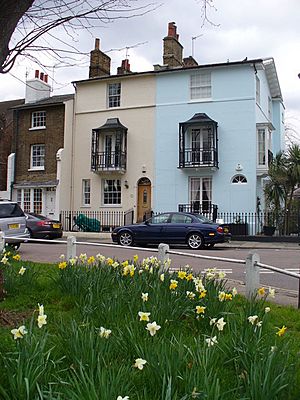 In the ten years from the time of the 2001 census, the population rose from 9,445 to 11,436, the sharpest ten-year increase in Kew since the early 20th century. This was partly accounted for by the conversion of former Thames Water land to residential use, and increases in property sizes. The figures are based on those for Kew ward, the boundaries of the enlarged parish having been adjusted to allow for all wards in the borough to be equally sized. 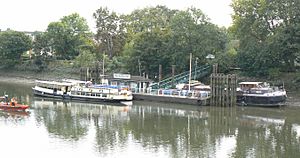 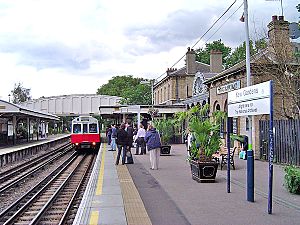 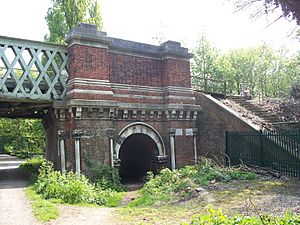 The 2011 census showed that 66.2% of the population were White British. Other White was the second largest category at 16%, with 8.1% being Asian.

A main mode of transport between Kew and London, for rich and poor alike, was by water along the Thames which, historically, separated Middlesex (on the north bank) from Surrey: Kew was also connected to Brentford, Middlesex by ferry, first replaced by bridge in 1759. The current Kew Bridge, which carries the South Circular Road (the A205) was opened by King Edward VII and Queen Alexandra in 1903.

The A205 road commencing there passes through Kew as a single carriageway. However Kew Road provides the main road link to Richmond. The M4 motorway starts a short distance north of Kew, providing access to Heathrow Airport and the west. The A316 road starts in Chiswick and continues over Chiswick Bridge and a complex junction with the South Circular Road at Chalker's Corner at the south-eastern end of the district.

River bus services supported by publicly funded Transport for London are from Kew Pier, to Richmond, Hampton Court and to Westminster Pier in central London. 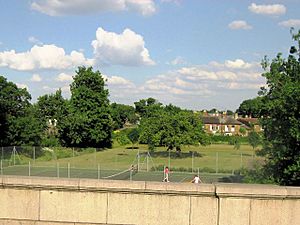 Kew's several other sports clubs include:

The nearest football club in the Football League is Brentford FC, approximately 1 mile away.

The Kew Horticultural Society, founded in 1938, organises an annual show on Kew Green in late August/early September as well as talks, events and outings throughout the year.

The Kew Society, which was founded in 1901 as the Kew Union, is a civic society that seeks to enhance the beauty of Kew and preserve its heritage. It reviews all planning applications in Kew with special regard to the architectural integrity and heritage of the neighbourhood, and plays an active role in the improvement of local amenities. The Society, which is a member of Civic Voice, organises community events including lectures and outings and produces a quarterly newsletter.

Five churches in Kew are currently in use:

All content from Kiddle encyclopedia articles (including the article images and facts) can be freely used under Attribution-ShareAlike license, unless stated otherwise. Cite this article:
Kew Facts for Kids. Kiddle Encyclopedia.