Mortlake Cemetery is a cemetery in Kew in the London Borough of Richmond upon Thames (historically in North Sheen, Surrey). It is also known as Hammersmith New Cemetery as it provided burials for the then Metropolitan Borough of Hammersmith when Margravine Cemetery was full. The cemetery opened in 1926 and is still in use. It is now managed by Hammersmith and Fulham Council.

The cemetery is located on Mortlake Road (the A205 or South Circular Road), opposite North Sheen Cemetery. The nearest London Underground station is Kew Gardens.

The cemetery contains the Commonwealth war graves of 109 service personnel of World War II. Many are buried in private graves but others are in a special services plot in the south-eastern corner of the cemetery. At the latter, the casualties are mainly buried in collective graves holding up to five bodies each due to the limited burial space. The names of those buried in the plot are listed on the CWGC-erected memorial that also lists service personnel of the same war who were cremated at Mortlake Crematorium.

Mortlake Crematorium was built next to the cemetery in 1939. Seventy-seven Commonwealth servicemen of World War II who were cremated at the crematorium are listed on a screen wall memorial erected by the Commonwealth War Graves Commission in the cemetery. They include England rugby international Vivian Davies (1899–1941) who was a captain in the Royal Artillery. The memorial is listed Grade II by Historic England. 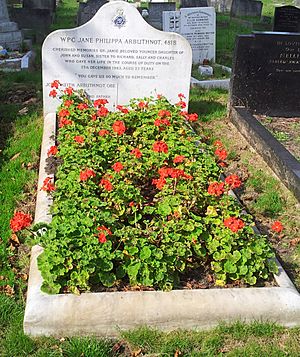 All content from Kiddle encyclopedia articles (including the article images and facts) can be freely used under Attribution-ShareAlike license, unless stated otherwise. Cite this article:
Mortlake Cemetery Facts for Kids. Kiddle Encyclopedia.