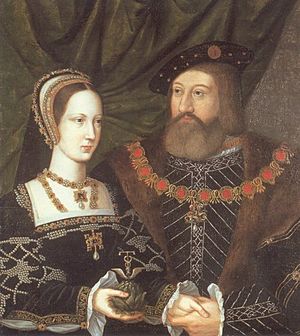 Mary Tudor (28 March 1495 – 25 June 1533) was the youngest daughter of Henry VII of England and Elizabeth of York. She was princess of England, and was Queen of France for three months. After being Queen of France, she married someone else, and became Duchess of Suffolk until her death.

Mary Tudor was born on 28 March 1495 in Richmond Palace. Her older brothers were Arthur, Prince of Wales, and Prince Henry, and her older sister was Princess Margaret. Henry and Mary were close as children. Later in life, when Henry became King Henry VIII of England, he even named his ship, the Mary Rose, after her. His first daughter, Mary (later known as Queen Mary I of England), was probably also named after her.

Mary's father was anxious for all his children to make good marriages, and many of the other kings and queens of Europe wanted Mary as a wife for one of their sons. She was first betrothed to Charles of Castile, later the Holy Roman Emperor. This betrothal was broken later, and she did not get married until after her brother Henry became king. When Mary was 18 she married King Louis XII of France, who was 52 years old. She was married in Abbeville, France, on 9 October 1514. Mary did not want to marry King Louis, but agreed when her brother said that she could marry anyone she wanted after Louis died. Louis died on 1 January 1515, and Mary soon married Charles Brandon, Duke of Suffolk. Mary did not have any children while married to Louis, but she did when she was married to Charles. Her children's names were Henry, Frances and Eleanor. Frances went on to be the mother of Lady Jane Grey, who was the Queen of England for only nine days.

After suffering failing health for some years, Mary Tudor died on 25 June, 1533 at the age of thirty eight at Westhorpe Hall, Westhorpe, Suffolk, possibly of cancer. Her husband then married Catherine Willoughby.

All content from Kiddle encyclopedia articles (including the article images and facts) can be freely used under Attribution-ShareAlike license, unless stated otherwise. Cite this article:
Mary Tudor, Queen of France Facts for Kids. Kiddle Encyclopedia.