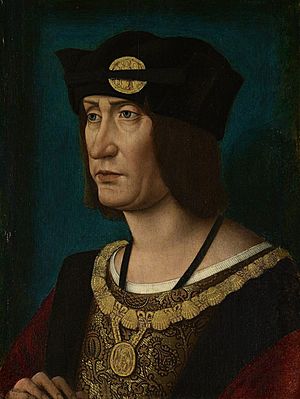 Louis's first wife was Jeanne of France, who was the daughter of Louis XI of France. At the time, Louis was not expected to become King of France. The King, Charles VIII, was a young man and could still have had children, but Charles had an accident and died suddenly. Charles was Jeanne's brother. Louis was Charles's cousin and next in line to the throne. When he became king, he had to end his marriage to Jeanne, partly because she was disabled and could not have children.

Louis's second wife was Anne of Brittany, who was the daughter of Francis II, Duke of Brittany. Anne had been married to King Charles VIII until his death, but all of their children had died. As a result of her marriage to Charles, the dukedom of Brittany had become part of the kingdom of France. Louis wanted to keep Brittany, but in order to do so he had to marry Anne. After her marriage to Louis, Anne had two daughters, who were called Claude and Renee.

In France, women were not allowed to rule the country, so Louis still wanted a son to become king after him. After Anne died, Louis married for a third time. His last wife was Mary Tudor, the sister of Henry VIII of England. She was many years younger than he was. Louis only lived for three months after their marriage. Because Louis had no sons, the throne went to Francis, the husband of his daughter Claude.

All content from Kiddle encyclopedia articles (including the article images and facts) can be freely used under Attribution-ShareAlike license, unless stated otherwise. Cite this article:
Louis XII of France Facts for Kids. Kiddle Encyclopedia.