Anne of Brittany facts for kids 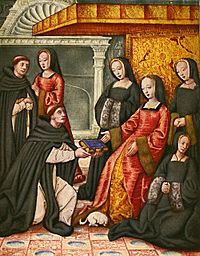 Anne was the daughter of Francis II of Brittany and Margaret of Foix. She was born in Nantes (then in Brittany, now officially outside that Région) on January 25, 1477.

Anne was married to Charles VIII of France on December 6, 1491. They had four children, but all of them died young.

After Charles died, Anne married Louis XII of France on January 8, 1499. They had two daughters:

All content from Kiddle encyclopedia articles (including the article images and facts) can be freely used under Attribution-ShareAlike license, unless stated otherwise. Cite this article:
Anne of Brittany Facts for Kids. Kiddle Encyclopedia.