Panorama of the inner courtyard

The Royal Château de Blois (French: "Château Royal de Blois") is a palace in France. It is in the center of the city of Blois in the Loir-et-Cher Department. It has been the home for several French kings.

It is also the place where Joan of Arc went in 1429 to be blessed by the Archbishop of Reims before departing with her army to drive the English from Orléans.

The château is made of several buildings constructed from the 13th to the 17th century around the main courtyard. It has 564 rooms and 75 staircases although only 23 were used frequently. There is a fireplace in each room. There are 100 bedrooms.

Preservation as a monument 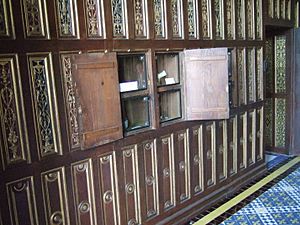 In 1841, under the direction of King Louis-Philippe, the Château de Blois was classified as a historic monument. It was restored under the direction of the architect Felix Duban, to whom is due the painted decoration on walls and beamed ceilings. The château was turned into a museum. On view for visitors are the supposed poison cabinets of Catherine de' Medici.

Today, the château is owned by the town of Blois and is a tourist attraction.

All content from Kiddle encyclopedia articles (including the article images and facts) can be freely used under Attribution-ShareAlike license, unless stated otherwise. Cite this article:
Château de Blois Facts for Kids. Kiddle Encyclopedia.