Battle of Agincourt facts for kids 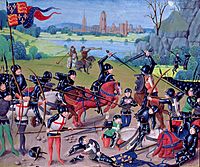 The Battle of Agincourt.

The Battle of Agincourt was fought on 25 October 1415 and was a major win for England against France in the Hundred Years' War. It led to several later English victories. Henry V of England led the English army and Constable of France Charles d'Albret led a larger French army. King Charles of France didn't engage because he was mentally unwell. Henry V was involved in hand to hand combat and was struck by an axe but his helmet saved him.

The English longbow was an important weapon for killing and winning this battle. It was more powerful than the French crossbow and they had more of them. The majority of the army were bowmen. The English army used sharp wooden archer's stakes to protect the archers from French mounted knights.

The English took prisoners but killed all except those of high rank. Overall the French lost 8000 men and the English lost 100 but historians are unsure of the actual numbers. The French mainly lost because they wore heavy armour and got stuck in the sticky mud at Azincourt (Agincourt).

All content from Kiddle encyclopedia articles (including the article images and facts) can be freely used under Attribution-ShareAlike license, unless stated otherwise. Cite this article:
Battle of Agincourt Facts for Kids. Kiddle Encyclopedia.