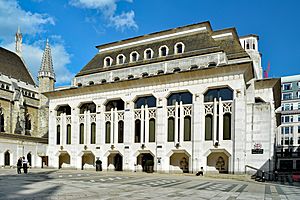 The Guildhall Art Gallery houses the art collection of the City of London, England. It is a stone building in a semi-Gothic style intended to be sympathetic to the historic Guildhall, which is adjacent and to which it is connected internally.

The original gallery was built in 1885 to house art collections from the City of London Corporation. After the original building was destroyed in The Blitz in 1941, a new facility was completed to house the collection, which includes about 4,000 items, in 1999. The centrepiece of the collection, John Singleton Copley's huge painting depicting The Defeat of the Floating Batteries at Gibraltar, was placed in a prominent position in the entrance hall of the gallery. 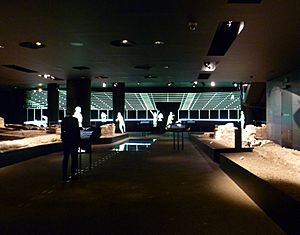 The Guildhall complex was built on the site of London's Roman amphitheatre, and some of the remains of this are displayed in situ in a room in the basement of the art gallery.

All content from Kiddle encyclopedia articles (including the article images and facts) can be freely used under Attribution-ShareAlike license, unless stated otherwise. Cite this article:
Guildhall Art Gallery Facts for Kids. Kiddle Encyclopedia.