The visible remains of an amphitheatre constructed during Roman London lie beneath the Guildhall Art Gallery complex in the City of London. Some of these remains are displayed in situ in a room in the basement of the art gallery. Discovered in 1988, the site is now a scheduled monument. 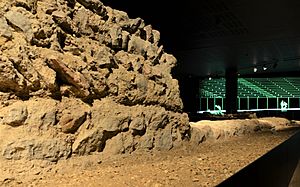 A section of wall

London's first Roman amphitheatre was built in AD 70 from wood but was renovated in the early 2nd century with tiled entrances and rag-stone walls. The amphitheatre was used for various public events such as gladiator games, entertaining soldiers and the public with animal fighting and public execution of criminals, as well as religious activities. After the ancient Romans left in the 4th century, the amphitheatre lay derelict for hundreds of years. In the 11th century the area was reoccupied and by the 12th century the first Guildhall was built next to it.

All content from Kiddle encyclopedia articles (including the article images and facts) can be freely used under Attribution-ShareAlike license, unless stated otherwise. Cite this article:
Amphitheatre (London) Facts for Kids. Kiddle Encyclopedia.