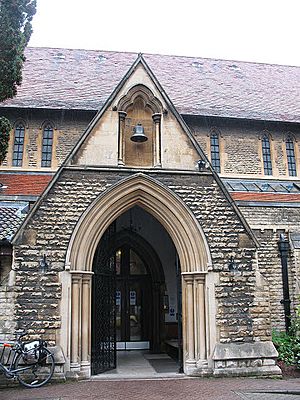 St Luke's Church, Kew, is a parish church in Kew, in the London Borough of Richmond upon Thames. It is part of the Church of England and the Anglican Communion and, locally, is a member of Churches Together in Kew. Together with St Philip and All Saints (the Barn Church), it is one of two parishes within the united benefice of Kew, St Philip & All Saints with St Luke. The church, built in the Gothic Revival style by architects Goldie, Child and Goldie, is also host to the Kew Community Trust and acts as a community centre. 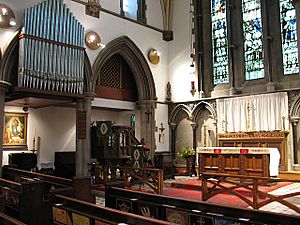 The parish publishes a magazine, The Link.

Kew's population increased considerably when the District line was extended to Richmond and a railway station was opened at Kew Gardens. To meet the needs of the extended parish, a temporary "iron church" (later Victoria & St John's Working Men's Club) was opened in Sandycombe Road. St Luke's Church, in The Avenue, was built to replace it, in 1889.

The large Victorian church, whose initial design plans included a spire that was never built, now has a small tower (accommodating a lift). This was added in 1983 when St Luke's was redesigned to create a smaller space for Christian worship in the former chancel area and to enable the former nave, and a second hall constructed in a loft conversion, to be used for community purposes also.

Former Liberal Party chairman Timothy Beaumont, Baron Beaumont of Whitley, was priest in charge from 1986 to 1991.

The community spaces in the building are currently occupied by the Kew Community Trust. The core activity of the Trust is the Avenue Club, a non-profit making social centre offering a range of recreational activities for the whole community.

All content from Kiddle encyclopedia articles (including the article images and facts) can be freely used under Attribution-ShareAlike license, unless stated otherwise. Cite this article:
St Luke's Church, Kew Facts for Kids. Kiddle Encyclopedia.