Marrickville sits on the northern bank of the Cooks River, opposite Earlwood and shares borders with Stanmore, Enmore, Newtown, St Peters, Sydenham, Tempe, Dulwich Hill, Hurlstone Park and Petersham. The southern part of the suburb, near the river, is known as Marrickville South and includes the historical locality called The Warren.

Marrickville is a diverse suburb consisting of both low and high density residential, commercial and light industrial areas.

The name Marrickville comes from the 24.3 ha (60 acres) 'Marrick' estate of Thomas Chalder, which was subdivided on 24 February 1855. He named it after his native village Marrick, North Yorkshire, England. The estate centred on the intersection of Victoria Road and Chapel Street. William Dean, the publican of the Marrick Hotel, in Illawarra Road (now the site of the Henson Park Hotel) is credited with adding the "ville" to Marrick when it was gazetted in 1861. 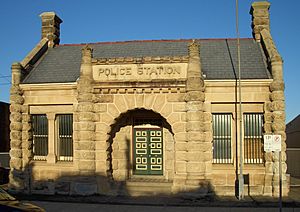 Thomas Holt (1811–1888) was a Sydney business tycoon who built a castellated Victorian Gothic mansion named ‘The Warren’ in 1857 in Marrickville South. It was designed by architect George Mansfield, and contained an impressive art gallery filled with paintings and sculptures from Europe. It had elaborate stables built into imposing stone walls, and large landscaped gardens filled with urns overlooking the Cooks River. Holt gave it that name because he bred rabbits on the estate for hunting, as well as the grounds being stocked with alpacas and other exotics. The Warren was a landmark in the district for some decades; the still-operating Warren View Hotel in Enmore as evidence of this.

Renovations were undertaken in 1866. There were also bathing sheds and a Turkish Bath built on the river. The 100-acre (0.4 km2) property was south of Wardell’s and covered the area from today’s Unwins Bridge Road to Illawarra Road and Warren Road. Thomas Holt was a large land holder in Sydney with another mansion at the edge of Gwawley Bay, Sylvania Waters, New South Wales in 1881,(his last and greatest residence, the monumental forty room Sutherland House mansion which was destroyed by fire in 1918) and vast property holdings from Sutherland to Cronulla.

As Holt's health began to be an issue, the Warren was subdivided in 1884 with the land around the immediate building's grounds being sold off - and the family returning to Britain for the remaining years of his life. He died in 1888.

The estate stables were demolished some time between 1884 and 1886, with the nearby Ferncourt Public School being originally built as a house "Prosna" by Polish born artist, Gracius Joseph Broinowski, from sandstone blocks of the stable, and a cedar staircase and marble mantelpiece purchased from Holt's estate installed in it.

It is obvious today the last block remaining where the mansion stood as it is indicated by the newer houses of the 1920s-1930s as well as, obviously the name of the road, driven down the western side of the block - "Mansion Street" - and "Holt St" adjacent to it forming the lower side of the square perimeter).

The Warren became a nunnery when the mansion and 12 acres (5 ha) of land were purchased by a French order of Carmelite nuns. The Carmelites were evicted from The Warren in 1903 for outstanding debts. By this stage the grounds appear to be bare with a high wood fence installed on the western side of the building about this time. It then was used during WWI for an artillery training range and this fenced area also appears in photos along with smaller buildings on the grounds nearby. It was resumed in 1919 by the New South Wales government was finally demolished in around 1922 - the land subdivided to build a housing estate for returned soldiers. Sir John Sulman was engaged to build this.

Not much remains of the once imposing castle-like building except for two stone turrets from the building indicating what was once on the general spot (this was recently vandalised and the commemorative plaque stolen; noted 2010. Originally piers from the back entrance of the building, which had been stored by the council for many years - they were placed on the headland with a memorial fountain in 1967 at Richardson's Lookout in Holt Street. Other remains are garden paths with flags and liners, one or two of the original stone blocks from the walls, and the base of what was probably a garden feature such as an urn or fountain. An area with a few cobblestones in the grass, remains under some native fig trees, and was probably a drive that led to the back of the stables. Also on the bank of the river below are the crypts that Thomas Holt built into a sandstone overhang for his family. No bodies were subsequently laid to rest except for the Mother Superior of the Carmelite order who was interred for a short time.

"Ferndale" in Kent Lane, Newtown, is the earliest of his four houses and the last surviving residence connected with Thomas Holt. It is heritage-listed.

Marrickville became a municipality on 6 November 1861. In 1948, it merged with neighbouring municipalities of St Peters and Petersham to form Marrickville Municipal Council.

The first school opened in August 1864 and the post office opened in 1865. The railway line to Bankstown opened in 1895. The station was known as Illawarra Road during construction. Later, when it was decided that Marrickville was a more appropriate name, the original Marrickville station was renamed Sydenham.

Over the past 5 years there has been a gradual change in Marrickville, with some media reports calling it "the new Paddington". There has been an influx of young professionals, as well as artists and musicians. A bohemian vibe has been cultivated and some say Marrickville is "the new Newtown", not Paddington.

Marrickville has become a hub of new and independent arts with a vibrant artistic community. Marrickville council launched the first local arts tour in March 2011, MOST (Marrickvlle open studio trail) and part of Art month Sydney. Marrickville is the main site for the Sydney Fringe Festival.

The Marrickville Festival is an annual festival organised by the Marrickville Council. It is a display of multiculturalism of the inner west with international food and live music and entertainment. Acts in the past have included Scott Cain.

Marrickville has a number of live music venues. The Factory Theatre hosts an array of live music and performances - from international rock concerts to cabaret shows, film and dance. There are also a number of smaller, more intimate entertainment venues such as The Newsagency, Lazybones Lounge, the Red Rattler and the Camelot Lounge.

Three music videos have been shot in or around Marrickville:

Films and TV shows that have been filmed in Marrickville include:

Marrickville has a wide range of cafes and restaurants with cuisines featuring Vietnamese, Thai, Chinese, Nepalese, Portuguese, Lebanese, Turkish, Modern Australian, Greek and Japanese. There are also a few notable bakeries and coffee artisans in the area.

The Australia day celebrations are held each year at Enmore park and are a popular event for locals. It is celebration of Marrickville's ethnic diversity and tolerant, vibrant community, with live music by a variety of bands with different cultural backgrounds and food stalls from around the world as well as annual fireworks.

Marrickville has a diverse community with a significant immigrant population. In the mid-20th century, Marrickville was a major centre of Sydney's large Greek community, and to an extent remains so.

At the 2011 census, the suburb of Marrickville recorded a population of 24,613 people. Of these:

Marrickville railway station is on the Bankstown Line of the Sydney Trains network. The adjacent station of Dulwich Hill serves the south-western part of the suburb.

The terminus of the Dulwich Hill Line of Sydney's light rail network is located adjacent to Dulwich Hill railway station. Access to the city is quicker by train, but the light rail may be used for some cross-regional journeys. The service also interchanges with Lewisham railway station on the Airport, Inner West & South Line.

Public buses serve all main roads, including Marrickville Road, Enmore Road, Illawarra Road, Victoria Road, Wardell Road and Livingstone Road. These include the 418 bus from Burwood to Bondi Junction via Ashfield, Dulwich Hill, Sydenham and Eastlakes, the 426 bus from Dulwich Hill to Circular Quay via Newtown and the CBD, the 423 bus from Kingsgrove to Martin Place via Earlwood, Newtown and the CBD, and the 412 bus which runs from Campsie to Kings Wharf via Kingsgrove, Earlwood, Petersham, Camperdown, Parramatta Road and the CBD.

The suburb is 5 kilometres north-east from, and lies under the flight path to, Sydney Airport.

Adjoining the town hall is the Marrickville Library. The library offers services which reflect the diversity of the community; among these are young readers groups and material available in Arabic, Chinese, Greek, Portuguese, Spanish and Vietnamese. Plans to build a new library have been announced by Marrickville Council and this major architectural project is scheduled for completion in 2015.

Many Marrickville homes are detached or terraced Victorian houses built in the late 19th century. Many others were built in the Federation style in the early 20th century. Whilst many of the larger estates have been subdivided, some still remain, including the heritage-listed Victorian Italianate manor Stead House, former residence of Samuel Cook, General Manager of The Sydney Morning Herald in the late 19th century. It was used as a Salvation Army hostel for some time, but was turned into apartments in 2011.

Marrickville is twinned with: 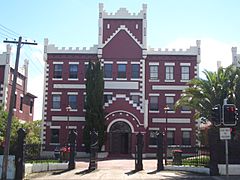 Marrickville is home to a number of sporting venues and teams. Henson Park, just off Sydenham Road, is home of the Newtown Jets rugby league team, formerly one of the elite Sydney teams, but currently playing in the second tier New South Wales Cup and acting as a feeder club for the Sydney Roosters. Marrickville Oval, on Livingstone Road, is used by lower grade teams from the Randwick Petersham Cricket Club, which plays in the Sydney Grade Cricket competition and the Newtown Jnr Jets. ] It is also home to Marrickville A reserve who are consistently made up of mostly Polynesian players(mostly family) who overcame the odds, making it into the semi finals before falling short in what was described as "Grand Final" performance. Fraser Park, next to the railway line between Marrickville and Sydenham stations is home to the Fraser Park FC soccer club which plays in the NSW Men's Premier League 2, the second tier of association football in NSW.

Marrickville Golf Course runs along the banks of the Cooks River.

All content from Kiddle encyclopedia articles (including the article images and facts) can be freely used under Attribution-ShareAlike license, unless stated otherwise. Cite this article:
Marrickville, New South Wales Facts for Kids. Kiddle Encyclopedia.