Marrickville railway station is located on the Bankstown railway line, serving the Sydney suburb of Marrickville. It is served by Sydney Trains T3 Bankstown line services. It was added to the New South Wales State Heritage Register on 2 April 1999.

Marrickville station opened on 1 February 1895 when the Bankstown line opened from Sydenham to Belmore.

The line through the station was electrified in 1926. The booking office on Platform 2 underwent alterations in 1944.

New stairs down from Illawarra Road were built in 1985.

In June 2016, an upgrade was completed with lifts and a new concourse built. During this work, the stairs to platform 1 were closed and replaced with a temporary footbridge from platform 2. Both platforms can be accessed from New Illawara Rd via the new concourse. Even though a concourse was built, the station remains ungated. 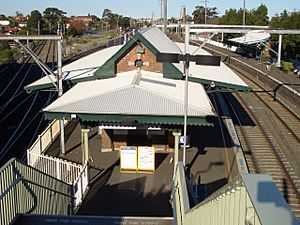 Station prior to upgrade.

Marrickville is a fairly major station on the Bankstown line. All trains make a stop at Marrickville, except for eastbound during the morning peak, when two trains per hour skip Marrickville. There will also occasionally be other services that don't stop, such as empty trains, or diverted services during trackwork.

Marrickville station is served by one NightRide route:

The Marrickville station complex consists of two station buildings: the Platform 1 building (1895) and Platform 2 building (1911), with associated platforms built at the same time, along with a booking office on Platform 2 (1917). It also includes two sets of pedestrian steps: a northern set (1917) and a southern set (mid-1980s), along with an overbridge on Illawarra Road (1911).

Marrickville railway station consists of one wayside platform to the south and an island platform to the north. Passenger rail only uses the south side of the island platform, with the Metropolitan Goods Line running on the north. The station buildings are original, as is the booking office at the western end of Platform 2. The station is accessed via stairs or lifts to both platforms from the concourse, or at a level entry onto Platform 2 from Station St. Illawarra Road is a major commercial shopping strip.

The Platform 1 building is a rectangular polychromatic face brick building with gabled roof and surrounding cantilevered awning clad in corrugated roof sheeting. The exterior was restored to original condition during upgrades in 2016. It contains a number of rooms, such as a ticket office, waiting rooms and toilets. The ticket office is no longer in use, as all paper tickets have been phased out on the Sydney Trains network in favour of smartcard ticketing (Opal card). All other rooms, except the toilets, are also locked off and not accessible to the public.

The Platform 2 building is a rectangular face brick building with gabled roof and integral shallower sloped single cantilevered awning. Internally, the building comprises a general waiting room; ladies room and ladies toilets, a store and men's toilets. As with the building on Platform 1, the exterior was restored during the 2016 upgrades. The whole building is closed to the public, mostly used as a storeroom.

Platform 1 has an asphalt surface with the original brick face and edge. The northern side of this platform (not used and fenced off) has a brick edge with the original brick face. Platform 2 also has its original brick face but with a concrete edge. Both platforms are approximately 160 metres long, enough to fit an 8 carriage suburban train. Both platforms are slightly curved and are equipped with LCD screens displaying next trains, together with automated announcements. Due to the lack of shelter at the eastern end of both platforms, there are no screens at this end. There are two small waiting shelters around the middle of platform 1, to encourage waiting passengers to spread out when it is raining, as all the station buildings are at the western end of the platform.

Steel girders and a concrete slab supported on central brick piers and side brick abutments. The original access stairs from the overbridge to Platform 1 had the original steel stringers but had new concrete treads and a new steel balustrade. The later stairs on the south were constructed from steel stringers supported on steel columns and with precast concrete treads. Both of these stairs were removed and replaced by the concourse during the 2016 upgrades.

The railway station at Marrickville is significant as it is a station on the Sydenham to Bankstown Line which was constructed to relieve congestion on the Main South Line as well as to encourage suburban development and the growth of agriculture in the late 19th and early 20th century. The highly intact main platform building represents the period of transition from the boom time of the 1880s to the standardisation of NSW railway building design from the 1890s onwards, while the booking office on Platform 2 reflects a later period of expansion in the first quarter of the 20th century.

Also of significance is the intactness of the weatherboard booking office which is unusual for being one of the few examples of a booking office located on a platform with street entry only and no access from the footbridge or overbridge, though the structure itself is representative of a standard design.

Marrickville railway station was listed on the New South Wales State Heritage Register on 2 April 1999 having satisfied the following criteria.

All content from Kiddle encyclopedia articles (including the article images and facts) can be freely used under Attribution-ShareAlike license, unless stated otherwise. Cite this article:
Marrickville railway station Facts for Kids. Kiddle Encyclopedia.