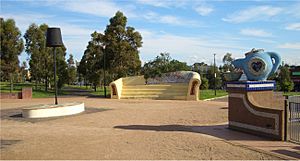 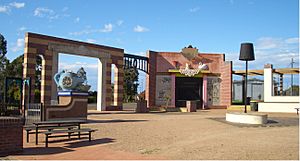 Sydenham is a suburb in the Inner West of Sydney, in the state of New South Wales, Australia. Sydenham is located 8 kilometres south of Sydney central business district and is part of the local government area of Inner West Council. Sydenham is surrounded by the suburbs of Marrickville, St Peters and Tempe.

Sydenham developed after the Illawarra line came through the area to Hurstville in the late 1800s. It was named after Sydenham, a suburb of London, similar for its close proximity to the city and a railway junction. The station was originally known as Marrickville when it opened on 15 October 1884. It was changed to Sydenham on 19 March 1895 when a new line was being built to Bankstown and the first station was to be called Marrickville. The post office opened in April 1899 as Tempe Park and was only renamed Sydenham in 1964.

Sydenham railway station is a junction for three lines on the Sydney Trains network: the Illawarra, Airport & South and Bankstown lines.

A cross country line connected the Cooks River Line and the Dulwich Hill line via Sydenham, operating along Railway Road and Sydenham Road in Sydenham.

The suburb suffers from aircraft noise because it is directly under the flight path of Sydney Airport. To alleviate resident noise complaints, many of the residential properties between Unwins Bridge Road and the Princes Highway were bought by the government and converted into a recreational park, which was named Sydenham Green after the park in London. Two heritage buildings remain standing along Railway Road: St Marys Church and a sandstone terrace. A series of oversized 'living room' sculptures - lamp, chairs and fireplace pays homage to the residential houses that formerly occupied the site.

All content from Kiddle encyclopedia articles (including the article images and facts) can be freely used under Attribution-ShareAlike license, unless stated otherwise. Cite this article:
Sydenham, New South Wales Facts for Kids. Kiddle Encyclopedia.