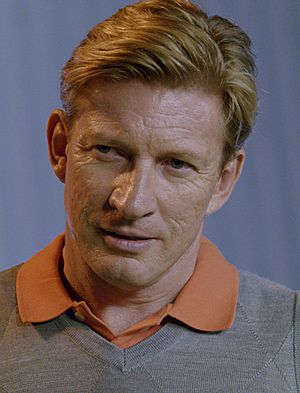 David Wenham (born 21 September 1965) is an Australian actor who has appeared in movies, television series and theatre productions. He is known in Hollywood for his roles as Faramir in The Lord of the Rings movie trilogy, Carl in Van Helsing, Dilios in 300 and its sequel 300: Rise of an Empire, Al Parker in Top of the Lake, and Lieutenant John Scarfield in Pirates of the Caribbean: Dead Men Tell No Tales. He is known in his native Australia for his role as Diver Dan in SeaChange. Wenham was born in Marrickville, Sydney, New South Wales, Australia.

All content from Kiddle encyclopedia articles (including the article images and facts) can be freely used under Attribution-ShareAlike license, unless stated otherwise. Cite this article:
David Wenham Facts for Kids. Kiddle Encyclopedia.