Blinky Bill the Movie is a 2015 Australian computer-animated adventure comedy film based on the Blinky Bill character, an anthropomorphic koala created by Dorothy Wall for a children's book series in 1933. The film was produced by Flying Bark Productions and co-produced by Assemblage Entertainment (India) and Telegael (Ireland).

In the town of Greenpatch, Australia, a courageous young koala named Blinky Bill (Ryan Kwanten) tells a story about his father, Mr. Bill (Richard Roxburgh) while embarking on a journey across the wild, and dangerous Australian outback in the hope of finding him.

Blinky's dad had created their home Greenpatch, where every animal could feel safe and live in peace. Blinky has been influenced by the legend of his father, who is on an adventure to the Sea of White Dragons. When Cranklepot the Lizard attempts to dominate Greenpatch and become the ruler, Blinky realises that he must go in search of his father. Throughout his adventure he befriends a girl koala named Nutsy, a lizard named Jacko, and a few other creatures who assist Blinky on his quest. He discovers that being a hero is complicated and requires teamwork. 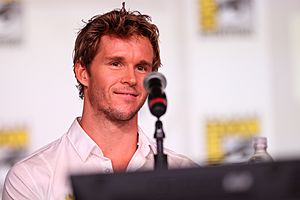 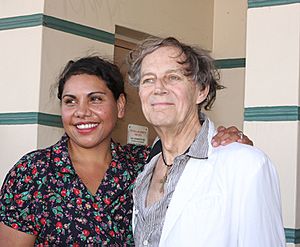 The film was followed by a 26-episode TV series, The Wild Adventures of Blinky Bill that aired on Seven Network.

All content from Kiddle encyclopedia articles (including the article images and facts) can be freely used under Attribution-ShareAlike license, unless stated otherwise. Cite this article:
Blinky Bill the Movie Facts for Kids. Kiddle Encyclopedia.