Paracyclotosaurus (meaning "Near Wheeled Lizard") is an extinct genus of temnospondyl amphibian, which would have appeared similar to today's salamander – but much larger, at up to 2.3 metres (7.5 ft) long. It lived in the Middle Triassic period, about 235 million years ago, and fossils have been found in Australia, India, and South Africa.

Although they could live on dry land, Paracyclotosaurus probably spent most of its time in water. They had flattened bodies and elongated heads, almost 60 centimetres (2 ft) long, that vaguely resembled those of modern crocodiles.

The type species P. davidi is only known from one complete specimen recovered from Australia. It was discovered by quarry miners in a brick pit in St. Peters in Sydney, New South Wales. The discovery, made in 1910, was from a large ironstone nodule within Ashfield Shale which contained the nearly complete skeleton. The reconstruction was finished in July 1914, and was initially determined to be closely related to Cyclotosaurus. The original bone of the P. davidi holotype specimen was in very bad condition, but after the bone was removed from the hard ironstone matrix, casts were made from the matrix mold, and a mold was made from those casts. Casts of the original bone show a fair amount of detail.

Paracyclotosaurus davidii was named after Sir Edgeworth David, the man who arranged for the British Museum (Natural History) to acquire the specimen. 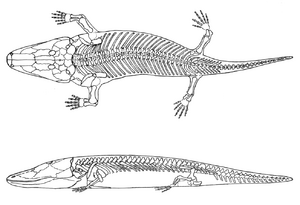 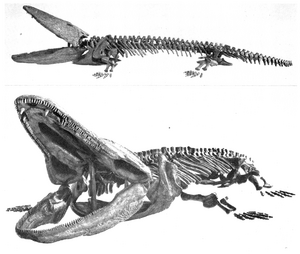 The skeleton of Paracyclotosaurus davidii was found articulated and complete, but the skull and lower jaws were slightly distorted. The mode of attachment of the head to the vertebral column are difficult to determine, and some bones were broken and misplaced before burial. These fractures all lie in the same region, that of the hinder part of the head, lower jaws, and inter clavicle.

These breaks, and the displacements which result from them, lie almost entirely in the region behind the eyes. They can be interpreted as the results of a single heavy blow, as it broke three horizontal sheets of bone - the skull roof, palate, and interclavicle - each almost two centimetres thick. These bones were surrounded and widely separated by soft tissues. A blow must have been delivered by a massive cylindrical body, such as a tree trunk from the bank, falling across the animal and washing it to the bottom of the lake.

Because of the unusually completely known structure, Paracyclotosaurus davidii can be accurately described. The small distortion of the head can be overlooked, and the complete preservation of skull and jaws makes its shape certain at a length of 60 cm. The right corner of the head is essentially undistorted and shows that the skull at its point of greatest depth is almost exactly as high as the lower jaw. Similarly, the lower jaw symphysis is the same height as the skull above it. Therefore, at its point of greatest height, the head was essentially of oval section, 22 cm high and 44 cm wide. The nostril, orbit and tympanic membrane are all directed upward, but whether the eye could be projected upward above the head to give a horizontal view, similar to a frog, is difficult to determine.

The first rib is short, but the second, which is in undisturbed position, implies a body width of at least 35 cm. The shoulder girdle is a rigid structure, the membrane bones lying in the skin having a maximum width of 44 cm at a point a little behind the lower jaws. The clavicles are upturned so that they incline inward, and have a minimum width of 23 cm. The maximum width of the body at the shoulder was approximately 53 cm. The forelegs, in a position of rest, would give a total width between the middle fingers of the forwardly directed hands of 87 cm. The distance of the sacral vertebra behind the skull is 115 cm. The body thus has a minimum height of 16 cm., and a width of more than 20 cm. The tail is about 50 cm long, and is probably flattened laterally. The total length of the animal is approximately 225 cm. 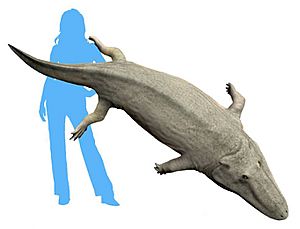 On land it could walk to some extent, making a track little less than a yard wide and a stride of approximately 20 cm. As the individual prints of the well-preserved forefoot would be about 100 square centimetres, the track would consist of two strips of forefoot prints, with similar hindfoot tracks just within them, and with a wide streak of body impressions. In water it is probable that little but the ends of the fingers and toes would make impressions in the mud, the body streak probably not being seen. The short tail could have had some use in swimming, though likely inadequate for any rapid movements.

Paracyclotosaurus davidii had a feeble dentition. The only teeth that could be driven into the body of an animal seized in the mouth are the ones on the vomers and palatines, and these stand very little above the maxillary teeth, a close-set row lacking points of any kind. It is very likely that the creature caught its food as the living Giant Salamander is said to do - by waiting until the prey came near, then quickly opening its enormous mouth and swallowing it. The most probable food would be small fishes, up to some 15 cm. long, which swam in shoals. Fishes like Promecosomina, a holostean, were abundantly found buried with Paracyclotosaurus.

A fish-eater, it might have lain in wait for prey, just below the surface of the water. When an unsuspecting fish came within reach of its jaws, Paracyclotosaurus lifted its massive head, its mouth opened wide and the fish was sucked inside. Modern predators, such as crocodiles, use this technique to catch some of their prey.

How the animal breathed is uncertain. It may have breathed similarly to the giant salamander genus Andrias, by moving the floor of the mouth by muscles attached to the hyoid and branchial arches. The ribs surround the upper part of the body, and articulate with the vertebral column by a wide and essentially two-headed upper end, attached obliquely to the spinal column. They could presumably have been used in an essentially mammalian manner for breathing, though the rigidity of the shoulder girdle may have restricted rib movement. Because the animal was probably as slow moving as a Giant Salamander, and the rate of its oxygen consumption very low, the buccal epithelium may have provided an efficient point of introduction of oxygen into the body. The skin of the ventral surface is thick, and the skin of the animal as a whole was unlikely to be an important respiratory surface.

All content from Kiddle encyclopedia articles (including the article images and facts) can be freely used under Attribution-ShareAlike license, unless stated otherwise. Cite this article:
Paracyclotosaurus Facts for Kids. Kiddle Encyclopedia.