Kyeemagh ( ky-EE-mə) is a suburb in southern Sydney, in the state of New South Wales, Australia. It is 12 kilometres south of the Sydney central business district, on the western shore of Botany Bay. Kyeemagh is in the local government area of the Bayside Council and is part of the St George area.

Kyeemagh is an Aboriginal name meaning 'beautiful dawn'. Prior to European settlement it was part of the lands of the Cadigal people.

In the 1920s the area was known as North Brighton. A map of the area showing the existing streets was included in the Commonwealth Electoral Rolls of that period.

The area between the Cooks River and Georges River was originally known as Seven Mile Beach. It was changed to Lady Robinson’s Beach in 1874 to honour Governor Sir Hercules Robinson’s wife. Cook Park is named after Samuel Cook who advocated it as a public pleasure area. 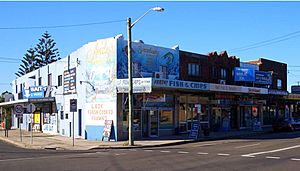 John Goode had property in West Botany Street, from which he built a private road to Seven Mile Beach, as Lady Robinsons Beach was known then. Goode Street was named in his honour, but this later became Bestic Street. Maps (Commonwealth Electoral Rolls, 1925, 1928) show a second street named in honour of John Goode, off Bestic Street. 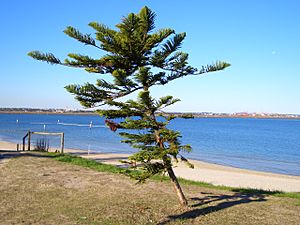 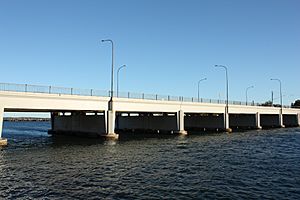 Kyeemagh is located on the southern bank of the Cooks River and the eastern bank of Muddy Creek. Lady Robinson Beach and Cook Park run along the eastern border. A small group of shops is located in Bestic Street near General Holmes Drive. Other parks include Kyeemagh Reserve and Lance Stoddert Reserve.

The Brighton-Le Sands Amateur Fisherman's Association and TS Sirius, an Australian Navy Cadet unit, is located in Bestic Street, beside Muddy Creek. C-side restaurant, part of the Cyprus-Hellene Club (formerly the site of Hashams take-away shop), is located in Cooks Park, on General Holmes Drive, close to the beach.

The Endeavour Bridge links Kyeemagh to Sydney Airport, Botany and Mascot. The entrance of the M5 Motorway is also located here which links to Arncliffe, Kingsgrove, Beverly Hills and west to Liverpool and Campbelltown. Kyeemagh Infants School is located on Beehag and Jacobson Avenues.

According to the 2006 Australian Bureau of Statistics Census of Population, there were 780 people usually resident in Kyeemagh. 37.5% stated they were born overseas with the top countries of birth being Greece 10.5%, Lebanon 2.3% and Cyprus 2.2%. English was stated as the only language spoken at home by 44.3% of residents and the most common other languages spoken were Greek 27.5%, Arabic 6.9% and Spanish 4.0%. The most common responses for religious affiliation were Orthodox 35.6%, Catholic 30.8% and Anglican 9.4%.

All content from Kiddle encyclopedia articles (including the article images and facts) can be freely used under Attribution-ShareAlike license, unless stated otherwise. Cite this article:
Kyeemagh Facts for Kids. Kiddle Encyclopedia.