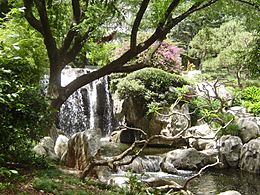 Waterfalls in the Garden 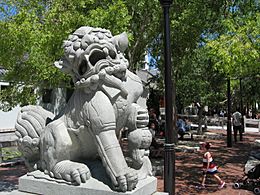 Entrance to the Garden

The Chinese Garden of Friendship (simplified Chinese: 谊园; traditional Chinese: 誼園) is a Chinese garden in Chinatown, Sydney, Australia. Modelled on the typical private gardens of the Ming Dynasty, the garden offers an insight into Chinese heritage and culture.

The Chinese Garden of Friendship was designed by Sydney's Chinese sister city, Guangzhou in China. Chinatown, Sydney complements the area's already rich Chinese heritage and culture. The gardens were officially opened in 1988 as part of Sydney's bicentennial celebrations and they were named the Garden of Friendship symbolising the bond established between China and Australia.

The Garden is located at the corner of Day Street and Pier Street, Darling Harbour, on the site of the former NSW Fresh Food and Ice Co, which is considered significant in the development of refrigeration and freezing in Sydney.

The Chinese Gardens are filled with beautiful bamboo plants and glistening waterfalls. The whole garden cannot be seen from any point within the garden. The garden has a number of features including the Dragon Wall symbolising the bond between New South Wales and Guangzhou, the Water Pavilion of Lotus Fragrance, the Twin Pavilion and The Tea House that offers traditional Chinese tea and other refreshments. The garden is also a popular venue for weddings.

The garden was used as a scene for Dulcea's compound in 20th Century Fox's 1995 superhero film Mighty Morphin Power Rangers: The Movie and also in the filming of The Wolverine in October 2012. Many features of the gardens were changed or covered up as the movie was set in Japan.

All content from Kiddle encyclopedia articles (including the article images and facts) can be freely used under Attribution-ShareAlike license, unless stated otherwise. Cite this article:
Chinese Garden of Friendship Facts for Kids. Kiddle Encyclopedia.