The Capitol Theatre is a heritage-listed theatre located at 3-15 Campbell Street, Haymarket, in the Sydney central business district, Australia. It was designed by Henry White and John Eberson and built from 1893 to 1928. The property was added to the New South Wales State Heritage Register on 2 April 1999. The former circus venue, atmospheric theatre and market venue in owned by Capitol Theatre Management Pty Limited, a wholly owned subsidiary of Foundation Theatres Pty Limited. Foundation Theatres owns the Sydney Lyric and Capitol Theatre.

The site of the Capitol Theatre has provided entertainment to the people of Sydney since the early 19th century when this piece of land was used by early settlers as a market place for produce and hay, giving this area its name "Haymarket". During the 1880s facilities for the bulk sale of fruit and vegetables came under increasing pressure. In March 1891, Sydney Council appointed a committee to recommend a new site for a major covered market. They suggested the adjacent space of the Haymarket and this proposal was adopted in the following July. The principal contractor for the building was Alexander Allen of Summer Hill and his tender of £24,902 was approved in November 1891. The markets opened in July 1893. The New Belmore Markets as it was called was designed by George McRae. The facade presented thirty-six arched bays to the streets: eleven to Campbell and Hay and seven to Parker and Pitt Streets.

The New Belmore Markets was not an economic success and led Council to seek alternative uses for the building. In 1912 the New Belmore Market was leased for ten weeks to Wirth Bros for the purpose of a circus and hippodrome. Council decided to recycle the fabric of the New Belmore Market to create a theatrical circus venue. In September 1912, the Council accepted Wirth's tender for a twenty-one year lease of the proposed Hippodrome. The building initially functioned as a fruit and vegetable market called "Belmore Markets". The markets were built in 1891 by McRae, City Architect, and the structural engineer Norman Selfe, but were commercially unsuccessful because they were located too far from Darling Harbour. The markets relocated in 1912, after which Wirth Bros took over the lease and opened their new Wirth Bros Hippodrome in 1916. Attractions included elaborate circus acts with animals such as elephants and seals, theatre and vaudeville shows. Although performing with some success for a decade, the Hippodrome failed financially. The old site was divided up between the Manning Building (1895–1924), facing Pitt Street, and the western half, which was rebuilt as a theatre in 1928.

The conversion was under the control of Robert Hargreave Broderick. The facade was dismantled and re-erected above a new ground storey which was in turn mounted on the old footings. The redevelopment was split into two major contracts: the eastern half now known as the Manning Building was awarded to J. M. & A. Pringle in May 1913 and the Hippodrome theatre to the west to William Maston and Thomas Yates in December the same year. The Hippodrome finally opened in April 1916.

Despite the Hippodrome's versatility, it was not a financial success and by 1926 Wirth's had decided to seek the remodelling of the buildings as a picture palace. Plans for the work were completed by Henry Eli White in February 1927 for "Capitol Theatre Sydney Limited" and the same month Wirths wrote to the Sydney City Council requesting a "remodelling" of the building for its proposed new function. Henry White was a very experienced theatre designer and in 1927 visited America with Stuart Doyle, the managing director of Union Theatres Ltd., to review the latest developments in theatre design. Whilst in the United States, architect John Eberson was engaged to provide White with designs for the conversion of the Hippodrome. The plans for an atmospheric auditorium were very much like Eberson's Riviera at Omaha, Nebraska. The conversion involved remodelling the interior and raising the roof trusses to make room for the atmospheric ceiling and extended slope of the new gallery. In May 1927, the Sydney City Council approved Wirth's proposed alterations. The Capitol opened on 7 April 1928. In 1929 the theatre was fitted to screen talkies but by 1931-32 Greater Union was in financial difficulties with the Depression. In November 1932 the Capitol closed its doors.

It re-opened in April 1933 screening second-rate movies. Maintenance economies gradually put machinery and lighting out of action and in 1945 all "unwanted" decoration including banners, tapestries and artificial foliage was stripped from the interiors. In 1972 the theatre lease was removed from Greater Union Theatres and awarded to Harry M. Miller for the production of Jesus Christ Superstar. At that time the atmospheric and ornamental fabric was removed. During the 1990s the lease was transferred to Ipoh Garden Developments Pty Ltd. At this time the Capitol Theatre underwent a detailed restoration and reconstruction to recover the original 1928 experience. It has now been returned to its original grandeur. 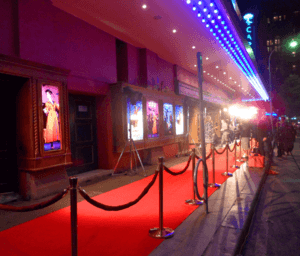 The red carpet outside the theatre entrance

A brick building with stone cornices, strings and other dressings, ornamental terracotta capitals, spandrils, rosettes etc. with tiles panels and into which was later built an atmospheric type plaster and brick picture palace.

The current theatre was designed by R. H. Broderick. It was intended as a hippodrome for arena theatre and featured stone cornices, terra-cotta capitals, rosettes and tiled panels. The architect Henry White turned the interior into a movie palace in 1927, creating the effect of an internal Italian garden or piazza. It also featured an internal imitation courtyard which is the only one surviving in Sydney. The building is listed on the Register of the National Estate. The Capitol Theatre was an "atmospheric" picture palace for many years, but went through a dark period in the 1970s and 1980s. In 1995, Capitol Theatre underwent a massive two-year reconstruction costing over $30 million.

As at 1 October 1997, the physical condition is excellent. The archaeological potential is low. 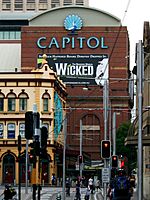 The closest train station is Central Station, it is approximately five minutes walk from the theatre. The closest light rail stop is Capitol Square, and is directly behind the Capitol Theatre.

As at 23 April 2001, the Capitol is the only atmospheric theatre to survive substantially intact in Australia. The structural fabric of the Capitol Theatre has a remarkable history of adaptation, reconstruction and restoration to accommodate changing uses. First, as the new Belmore Markets in 1892-93; then as a permanent circus venue (Hippodrome) for Wirth Bros and an office and shopping block in 1913-16; finally in the conversion of the Hippodrome to an atmospheric theatre for Union Theatres Ltd in 1927-28.

Capitol Theatre was listed on the New South Wales State Heritage Register on 2 April 1999 having satisfied the following criteria.

The structural fabric of the Capitol and Manning Buildings have a remarkable history of adaptation, reconstruction and restoration to accommodate changing uses. First, as the new Belmore Markets in 1892-93; then as a permanent circus venue (Hippodrome) for Wirth bros and an office and shopping block in 1913-16; finally in the conversion of the Hippodrome to an atmospheric theatre for Union Theatres Ltd in 1927-28.

The buildings now on the site: Watkins' terrace, the Capitol theatre and the Manning Building, together with the adjacent former Commercial Bank and Corporation Building in Hay Street, form a largely nineteenth century enclave, modest in scale, homogenous in alignment and lively in detail, which makes it a precinct of considerable townscape quality.

The Capitol is the only atmospheric theatre to survive substantially intact in Australia.

All content from Kiddle encyclopedia articles (including the article images and facts) can be freely used under Attribution-ShareAlike license, unless stated otherwise. Cite this article:
Capitol Theatre, Sydney Facts for Kids. Kiddle Encyclopedia.