José Montserrate Feliciano (born September 10, 1945 in Lares, Puerto Rico) is a Puerto Rican singer. A victim of hereditary glaucoma, he was left permanently blind at birth. Feliciano overcame the effects of his impairment to score many international hits.

He was first exposed to music at age 3. At five, his family moved to Spanish Harlem, New York City. At age 9, he played on the Teatro Puerto Rico. He could play various instruments (such as the accordion) by then but he wanted to learn to play the guitar. To learn, he locked himself in his room for up to 14 hours a day to listen to 1950s rock albums but also classic guitarist like Segovia and Jazz player like Wes Montgomery, and had assistance from Harold Morris.

At 17, he quit school to play in clubs as his family was going through an insecure economic situation. That year also, he had his first professional, contracted performance in Detroit.

In 1966, he went to Mar Del Plata, Argentina, to perform at the Festival de Mar Del Plata. There, he impressed RCA Victor officials, who told him to stay there to record an album in Spanish. They weren't sure what they wanted to record, but Feliciano suggested they record bolero music. The result was two smash hits with singles.

A year later Feliciano was to perform in Great Britain, but the authorities would not allow his guide-dog into the country. The stringent quarantine measures of those days were intended to prevent the spread of rabies. Feliciano expressed his anger in the song No dogs allowed. The live version made the charts in 1969.

After two more successful albums, Feliciano had become a household name all over Latin America. Then, he moved to Los Angeles, to pursue his dream of becoming a household name in the United States also.

Feliciano composed Feliz Navidad (I wanna wish you a Merry Christmas) which has become a Christmas classic in the United States as well as in Latin-America, and his own versions of The Doors' song Light My Fire and for his High Heel Sneakers, He immediately became a sensation all across North America and sold millions of albums on the strength of those three songs, he won 2 Grammy for "Best New Artist of the Year" and for "Best Pop Song of the Year" in 1969. 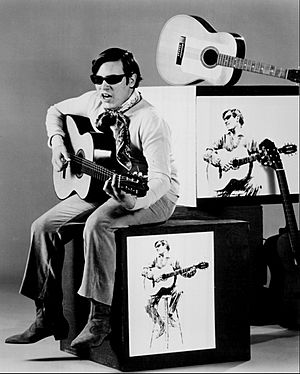 In 1968, at the height of protests against the Vietnam War, Feliciano was given the opportunity to sing the Star-Spangled Banner at Tiger Stadium during the World Series. His highly personalized, slow, Latin-jazz performance proved highly controversial. Some called his rendition unpatriotic and a disgrace. Others understood the emotions and sincerity of his performance, and he emerged as a counterculture hero. The rendition was released as a single which charted for 5 weeks on the Billboard Hot 100. Feliciano's Star-Spangled Banner took place 10 months before the now famous Jimi Hendrix rendition at Woodstock.

He also wrote and performed the theme song to the 1970s comedy series Chico and the Man, and played a guest role on that series as Chico's (Freddie Prinze) cousin, singer Pepe Fernando, also in the 70s, he acted and composed in some television series and movies including McMillan & Wife, Kung Fu episodes and the soundtrack of the movie "Aaron loves Angela" in 1976 and "Mackenna's Gold" with Quincy Jones. Feliciano holds the distinction of being one of the few singers to have enjoyed success both in Spanish music and in English rock and roll.

In the 70s he was considered one of the most incredible guitarist of our time: He won consecutively five times in the award for best Pop Guitarist from guitar Player Magazine and also was voted in Jazz, Classic and rock fields.

He received a star in the Hollywood Walk of Fame in 1987, after continuing being a very popular singer during the 1980s. He had his hands cast on the famous Madame Tussaud's museum's Wall of Fame, and he has a star in the Walk of Fame of his native Puerto Rico. 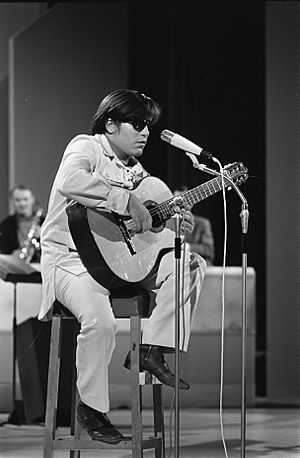 In Austria he recorded with the famous "Vienna Symphony Orchestra" which also performed live with Jose at Danube Park in Vienna with more than 50.000 people attending and being broadcast on national televison. During the 80s Jose recorded an impressive number of albums and hits, for which he overall won 4 Grammy awards for best latin performer.

In 1995, Feliciano was honored by the government of New York, which re-named Public School 155 the Jose Feliciano Performing Arts School.

José Feliciano met Susan Omillian, an art student, in Detroit, Michigan in August 1971. After becoming friends and dating for 11 years they married in 1982. They have three children: a daughter, Melissa, and two sons, Jonathan and Michael.

All content from Kiddle encyclopedia articles (including the article images and facts) can be freely used under Attribution-ShareAlike license, unless stated otherwise. Cite this article:
José Feliciano Facts for Kids. Kiddle Encyclopedia.