Weston is a town in Fairfield County, Connecticut, United States. The population was 10,354 at the 2020 census with the highest median household income in Connecticut. The town is served by Route 57 and Route 53, both of which run through the town center. About 19% of the town's workforce commutes to New York City, about 45 miles (72 km) to the southwest.

Like many towns in southwestern Connecticut, Weston is among the most affluent communities in the United States. Data collected in 2019 showed that Weston had the highest median household income in Fairfield County, Connecticut, at US $219,868. In 2015, Connecticut Magazine rated Weston as the 9th best among towns in Connecticut with median home values over $325,000. The rating considers education, crime, economy, community engagement, and culture/leisure. In 2017, SafeWise ranked Weston the safest town in Connecticut and the 6th safest town in the country.

Weston is the closest Connecticut town to New York City without a train station. Aside from a handful of stores that form the town's center, Weston has little commercial development and residential development is limited by two-acre zoning. Most of Devil's Den Preserve, a 1,746-acre (707 ha) nature reserve, which gets 40,000 visits a year, is located in the town.

In the 17th century, Weston's first English settlers were mostly farmers living in the town of Fairfield, Connecticut, the boundaries of which extended to Weston until the late 18th century. The Norfield Parish was created in the area now occupied by the towns of Weston and Easton. In 1787, the area was formally incorporated as the Town of Weston. In 1845, the Town of Easton was split off from Weston.

A meteor exploded above the town December 14, 1807. Six pieces, totaling 28 pounds (13 kg), were recovered and examined by scientists, who issued a report. This was the first time that people realized the nature of meteors.

Despite rocky soil, farmers in town grew apples, onions, and potatoes. Grist, cider, lumber, and fulling mills were built. The town had nine manufacturers by 1850, but two decades later only the Bradley Edge Tool Company still thrived. That factory burned down in 1911.

Unlike other nearby towns, Weston never had a railroad built through it, which stifled the development of non-agricultural businesses. Between the Civil War and the Great Depression, the town's population dropped from approximately 1,000 to a low of 670, by 1930. Artists, writers, and actors from New York became attracted to the community in the 1930s and began settling in it. Construction of the Merritt Parkway, which arrived to the south of Weston in 1938, resulted in further population growth.

The Saugatuck River begins to the north in Redding. It flows through the town and ends in Long Island Sound in neighboring Westport.

Weston is bordered by Westport to the south, Wilton to the west, Redding to the north, Easton to the east, and Fairfield to the southeast.

There were 3,289 households, out of which 49.8% had children under the age of 18 living with them, 78.4% were married couples living together, 5.0% had a female householder with no husband present, and 15.1% were non-families. 11.2% of all households were made up of individuals, and 4.9% had someone living alone who was 65 years of age or older. The average household size was 3.03 and the average family size was 3.28.

The landscape of Weston is characterized by open spaces. Almost one quarter of the town is permanently devoted to open space use, including: 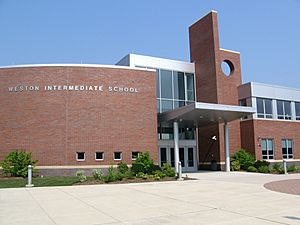 There are four public schools in the Weston Public Schools district, all located on School Road:

In June 2012, 24/7 Wall St. ranked Weston as the second wealthiest school district in the United States.

In Aug 2015, Weston High School was ranked the best in the state and 47th best in the country according to a survey conducted by Newsweek magazine. Each year, the magazine ranks the top 500 high schools in the country based on which institutions do the best job of preparing students for college. According to the study, Weston High School has a 97.2% college enrollment rate, a 100% graduation rate, an AP/IB/Dual Enrollment Composite of 73, a weighted SAT/ACT score composite of 69.4, a student retention rate of 91.7% and a counselor-to-student ratio of 1:156. In addition, the average SAT score at Weston High School is 1784, the average ACT score is 26.6, and the average AP test score is 3.87. [

In April 2019, U.S. News & World Report ranked Weston High School second best high school in the state and 169th best high school in the country out of 17,245 high schools ranked. In addition, Weston High School was also ranked 65th in STEM High Schools with a town graduation rate of 100%. U.S. News gave Weston a scorecard of 99.02% out of a possible 100. The Best High Schools rankings identify the country's top-performing public high schools. The goal is to provide a clear, unbiased picture of how well public schools serve all of their students – from the highest to lowest achieving – in preparing them to demonstrate proficiency in basic skills as well as readiness for college-level work.

All content from Kiddle encyclopedia articles (including the article images and facts) can be freely used under Attribution-ShareAlike license, unless stated otherwise. Cite this article:
Weston, Connecticut Facts for Kids. Kiddle Encyclopedia.