Georgetown is a village and census-designated place in Fairfield County, Connecticut, United States. It is located in the area where the towns of Wilton, Redding, Ridgefield, and Weston meet.

The village and its surrounding area are also defined as the Georgetown census-designated place (CDP). As of the 2010 census, the population of the CDP was 1,805.

On April 9, 1987, the central portion of the village was listed on the U.S. National Register of Historic Places as the Georgetown Historic District. A map shows its approximate location within Georgetown. The historic district is an area of 90 acres (360,000 m2) that includes the Gilbert and Bennett manufacturing plant, institutional housing built for the plant workers, and other private homes. The district includes portions of Georgetown in the towns of Redding and Wilton.

Map of the Georgetown CDP 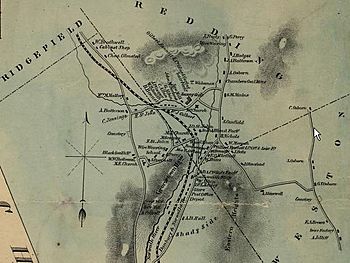 Georgetown on Clark's map of Fairfield County, published in 1856

There were 572 households out of which 44.9% had children under the age of 18 living with them, 71.0% were married couples living together, 4.7% had a female householder with no husband present, and 20.3% were non-families. 16.3% of all households were made up of individuals and 5.9% had someone living alone who was 65 years of age or older. The average household size was 2.87 and the average family size was 3.27.

All content from Kiddle encyclopedia articles (including the article images and facts) can be freely used under Attribution-ShareAlike license, unless stated otherwise. Cite this article:
Georgetown, Connecticut Facts for Kids. Kiddle Encyclopedia.