Aspetuck is a village, which in Connecticut is an unincorporated community on the Aspetuck River, in Fairfield County, Connecticut, mostly in the town of Easton but extending also into Weston. It is significant for being the location of the Aspectuck Historic District, a well-preserved collection of houses from the 18th and 19th centuries. The area was settled in the 17th century. It was a long-time home of Helen Keller. According to a New York Times real estate section article, "The district gets its name from the Aspetuck Indians, who lived along the river. In 1670, they sold the land to English settlers for cloth, winter wheat and maize valued at $.36." Weston was incorporated in 1787, and Easton was split out and incorporated in 1845.

The Aspetuck Historic District is a historic district that preserves part of the historic village. It was listed on the National Register of Historic Places in 1991. It occupies about 80 acres (32 ha) on the banks of the Aspetuck River and includes the oldest section of Easton. The 22 houses in the historic district date from 1750 to 1850. Some structures in the district are examples of Colonial Revival architecture. The district is considered significant for being a "Connecticut farming community that hasn't seen much change" and the home of Helen Keller in her later years. Helen Keller, who was blind and deaf, often walked through the neighborhood by herself, using as her guide a fence that extended down to the Aspetuck River.

The historic district is defined to "exclude excessive back acreage" and also "the district stops short of the historical extent of the community in order to exclude an area where the majority of buildings would be noncontributing due to alterations or recent origin."

The district "is significant because it embodies the distinctive architectural and cultural-landscape characteristics of a farming community from the late colonial and early national periods.... The widely spaced distribution of houses, most accompanied by a barn and all with ample yards that once served as pasture, field or garden recalls the appearance of an inland Connecticut farming community when agriculture was the basis of the local economy. The predominant type of building in the district—the traditional center-chimney, gable-roofed dwelling—is also characteristic of Connecticut farming communities of the late 18th and early 19th centuries...."

The district is significant because a house on Redding "was the long-time home of Helen Keller, who lost her hearing and sight at an early age, and whose long struggle to overcome these handicaps has provided inspiration to millions...." 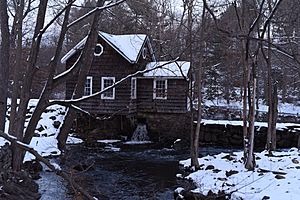 Significant structures in the district include:

All content from Kiddle encyclopedia articles (including the article images and facts) can be freely used under Attribution-ShareAlike license, unless stated otherwise. Cite this article:
Aspetuck, Connecticut Facts for Kids. Kiddle Encyclopedia.