Easton is a town in Fairfield County, Connecticut United States. The population was 7,605 at the 2020 census. Easton contains the historic district of Aspetuck and the Plattsville census-designated place.

Easton is made of green terrain.

Easton was first settled in 1757 by men from Fairfield. In 1762 a congregation called the North Fairfield Society was established, and it gradually evolved into Easton. In 1787 Weston, then including lands now defined as Easton, was incorporated out of Fairfield. The area was slow to develop because of the rough hills along the Aspetuck River, and so it was not until 1845 that what is now Easton separated from Weston. Today, half of the town's property is owned by the Aquarion Water Company of Connecticut, the major supplier of water in the area.

On June 1, 1968, the deaf and blind activist Helen Keller died at the age of 87 in her Easton home, where she chose to spend her final days. Her house is still intact today and has been owned by several families since her death. The local middle school bears her name.

The 2009 Rockefeller Center Christmas Tree was a 76-foot (23 m) Norway Spruce donated from a private residence in Easton. 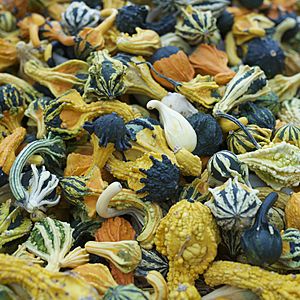 Silverman's Farm, close up of gourds, during the fall.

Snow's Farm is located at 550 Sport Hill Road. The farm has been family owned and operated since it was founded in 1912, with the current owner's being the 4th generation of Snow's. Snow’s Farm offers a variety of products including: 100% natural organically composted humus loam and soil, 100% natural organically composted manure, a variety of mulches, sand, gravel and stone, hay, fill, seasoned firewood, and farm fresh eggs.

Maple Row Tree Farm is located at 539 North Park Avenue. It was started in the mid-1950s. During the 1700s it was a dairy farm owned and run by the Edwards family. The farm is over 200 acres (81 ha) in size, and the Edwards family continues to own and operate the farm. During the Christmas season, visitors can choose and cut their own tree, or they can buy a pre-cut tree. Pre-cut trees are up to 12 feet (3.7 m) tall, while trees to select and cut may be up to 9 feet (2.7 m) tall. Maple Row Tree Farm grows eight different types of trees, including Balsam Fir, Canaan Fir, Colorado Blue Spruce, Concolor Fir, Douglas-fir, Eastern White Pine, Fraser Fir, Norway Spruce and White Spruce.

Silverman’s Farm is located at 451 Sport Hill Road. The farm was started in the 1920s by Ben Silverman. During the 1970s and 1980s Silverman’s became a pick your own fruit farm. In 2004 the apple cider mill was closed due to changes in the pressing standards. Today apple cider is sold at Silverman’s Farm Market, but it is not made on the premises. Silverman’s has a petting farm which includes buffalo, llamas, sheep, pigs, goats, fallow deer, donkeys, emu, and other animals. The farm also has tractor rides, an orchard, a farm market and a florist.

Sport Hill Farm is located at 596 Sport Hill Road. It is a small sustainably operated farm providing fresh, healthy, and organic delicious produce as well as education on farming in the area to anyone who is interested. Founded in 2001, the farm raises chickens, goats, and dozens of other vegetables.

Sherwood Farm is located at 355 Sport Hill Road. It includes a shop where one can purchase fresh produce. Founded in 1713, the farm now produces Eggs, Peppers, Cucumbers, Corn, Tomatoes, Radishes and Honey whilst offering Pumpkins throughout the months of October and November.

Greiser's Store is at the intersection of Center and Westport Roads. It's been owned and operated by the Greiser family since 1926 so is celebrating 90 continuous years. Store has a Deli with freshly made sandwiches, breakfast rolls and other delicious foods. Browse 2 stories of antiques and collectibles plus more outside. Gas pumps include diesel and regular. Easton Post Office has operated from the same store for several decades. Current owner/operator is Dick Greiser aka "Dirty Dick" who is well known for his wicked sense of humor.

The Easton Village Store is located at 440 Sport Hill Road across from the town green. The store offers Brick Oven Pizza, A Selection of Sandwiches, and other Hot Food Items. The Store has an operational Citgo petrol station. Along with this, the Store also functions as a basic grocery store and a community meeting place. A recent addition and renovation which opened in Spring/Summer 2013 practically doubled the size of the store. The EVS is also the home of one of the most famous sandwiches in the New England Area, known as the Rustic Russian, it is the creation of the resident chef of the establishment, J. Christian Huribal, known fondly by his friends and peers as "Lips."

The Easton Public Library is located at 691 Morehouse Road, across from the Police Department. The Library offers a selection of Children's and adult books along with a reference section. The annual Memorial Day Parade finishes at the 9/11 memorial in front of the building.

The Easton Post Office is located at 295 Center Road. It offers 700 P.O. boxes and adjoins a petrol station.

The new Easton Animal Control Faculty is located at 385 Morehouse Road. The center responds to dog and cat related calls along with wildlife, bird and livestock calls. There is currently one officer stationed there. The new shelter was built in 2012. All the dogs there are up for adoption.

Of the 2,465 households, 42.3% had children under the age of 18 living with them, 75.8% were married couples living together, 6.3% had a female householder with no husband present, and 15.7% were non-families. 12.4% of all households were made up of individuals, and 6.2% had someone living alone who was 65 years of age or older. The average household size was 2.95 and the average family size was 3.23 individuals.

The Route 59 bridge in Easton, which carries more than 10,000 cars and trucks every day over the Mill River, has a substructure rated in critical condition by state safety inspectors. As of early August 2007, the bridge was one of 12 in the southwestern part of the state (including New Haven) with safety inspection ratings so low they are considered to be in critical condition. The ratings for these bridges were worse than the I-35W Mississippi River bridge in Minneapolis, which collapsed during rush hour on August 1, 2007. 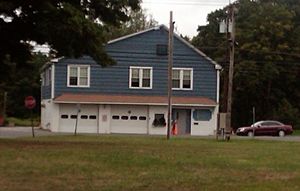 Easton is protected by eight paid firefighters of the Easton Fire Department (EFD) and the volunteer firefighters of the Easton Volunteer Fire Company # 1. Founded in 1921, EFD operates out of one fire station, and runs an apparatus fleet of three engines, one attack engine, one haz-mat unit, one brush unit, and one command vehicle. The Easton Fire Department responds to over 500 emergency calls annually. In 2015, the fire department responded to 539 incidents.

The Route 59 bridge in Easton, which carries more than 10,000 cars and trucks every day over the Mill River, has a substructure rated in critical condition by state safety inspectors. In 2007, the bridge was one of 12 in the southwestern part of the state with "critical" safety inspection ratings.

All content from Kiddle encyclopedia articles (including the article images and facts) can be freely used under Attribution-ShareAlike license, unless stated otherwise. Cite this article:
Easton, Connecticut Facts for Kids. Kiddle Encyclopedia.