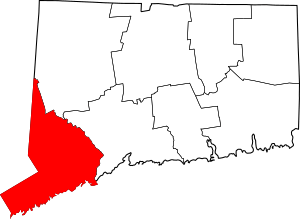 Location of Fairfield County in Connecticut

All of the National Historic Landmarks, are listed here or in the Greenwich and Stamford subareas. Forty-six of these here or in Greenwich or Stamford are historic districts.

Architecture addressed in the NRHP listings is quite varied. Of special interest is an unusual concentration of modern or International Style houses in New Canaan, Connecticut, designed by the "Harvard Five" architects, including: Landis Gores House, the Richard and Geraldine Hodgson House, the Philip Johnson Glass House, and the Noyes House.

There are numerous bridges included in the listings. Seven are moveable bridges, including the Saugatuck River Bridge from 1884, the oldest moveable bridge in the state, and the Washington Bridge which carries U.S. 1 into New Haven County. Five are moveable railway bridges: the Mianus River Railroad Bridge, the Norwalk River Railroad Bridge, the Saugatuck River Railroad Bridge, the Pequonnock River Railroad Bridge (in Bridgeport), and the Housatonic River Railroad Bridge. One bridge is part of a dam and hydroelectric plant complex, the Stevenson Dam Hydroelectric Plant. Five bridges bring roads across shorter crossings: the Perry Avenue Bridge in Norwalk, the Main Street Bridge and the Turn-of-River Bridge in Stamford, the Riverside Avenue Bridge in Greenwich, and the picturesque Pine Creek Park Bridge in Fairfield. Also there are numerous bridges that are included in the Merritt Parkway listing, out of 69 original bridges of the parkway. (This includes both bridges carrying the Merritt Parkway, and bridges crossing it). Other bridges are contributing structures within historic districts, such as the Pulaski Street Bridge within the South End Historic District of Stamford, and a concrete arch bridge from 1941 in the Aspetuck Historic District.

There are nine NRHP-listed lighthouses (including two in Bridgeport).

Seven sites are listed partially or wholly for their association with the marches of French general Rochambeau's troops through the county, on their way to and from victory at Yorktown, Virginia in 1781. The sites still evoke the character of the well-mapped route of the army in 1781 and 1782.

All content from Kiddle encyclopedia articles (including the article images and facts) can be freely used under Attribution-ShareAlike license, unless stated otherwise. Cite this article:
National Register of Historic Places listings in Fairfield County, Connecticut Facts for Kids. Kiddle Encyclopedia.