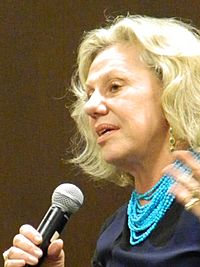 Erica Jong (née Mann; born March 26, 1942) is an American novelist, satirist, and poet. She is known for her 1973 novel Fear of Flying. The book became controversial for its claims towards female sexuality. According to Washington Post, it has sold more than 20 million copies worldwide.

Jong was born in New York City. She studied at Barnard College and at Columbia University.

All content from Kiddle encyclopedia articles (including the article images and facts) can be freely used under Attribution-ShareAlike license, unless stated otherwise. Cite this article:
Erica Jong Facts for Kids. Kiddle Encyclopedia.