Lares is a mountain municipality of Puerto Rico's central-western area located north of Maricao and Yauco; south of Camuy, east of San Sebastián and Las Marias; and west of Hatillo, Utuado and Adjuntas. Lares is spread over 10 wards and Lares Pueblo (Downtown Lares). It is part of the Aguadilla-Isabela-San Sebastián Metropolitan Statistical Area.

A city adorned with Spanish-era style churches and small downtown area stores, Lares is a breezy area that is about 1.5 hours from San Juan by car.

Lares has one major claim to fame: The 1868 uprising that happened there, brought on by pro-independence rebels who wanted Puerto Rico to gain its freedom from Spain. The movement, known thereafter as El Grito de Lares (literally, The Cry of Lares, or Lares Revolt), was soon extinguished, making Lares the site of the shortest-lived republic ever.

The flag of Lares is now considered by many Puerto Ricans to be the symbol of their independence movement. Initially developed to represent the island's struggle to gain its emancipation from Spain, the flag is now used by those struggling to liberate the island from the United States.

Lares was founded on April 26, 1827 by Francisco de Sotomayor and Pedro Vélez Borrero. The city was named after one of its settlers, Don Amador de Lariz, a Spanish nobleman.

Lares was one of the last municipalities to be established in Puerto Rico, receiving its charter from the then governor and captain-general of the Province of Puerto Rico, Don Miguel de la Torre, on October 6, 1831. The lengthy process was begun in 1824 and was led by Don Juan Francisco de Soto Mayor. However late its official foundation, Lares had its beginnings as el Hato de Lariz in the early 16th century. The Spanish word hato means pasture or cattle ranch. This particular hato owes its name to Don Amador de Lariz a Spanish nobleman and colonizer. In 1525, the Spanish Crown granted him an encomienda (a tract of land) that more or less occupies present day Lares, along with one hundred and fifty Tainos to work the property. The name Lariz is of ancient Basque origin and as far as is known, Don Amador de Lariz left no descendents and his name has disappeared from Puerto Rican genealogy. Over the centuries the Basque name was transformed into a Spanish one but interestingly enough, the Jibaros, or mountain-folk of the region, pronounce it LAH-reh to this day.

Prior to becoming a municipality in its own right, Lares was a barrio or ward of the town of San Sebastian del Pepino. The principal reason for Lares' foundation was the long and arduous travel that families residing there encountered in going to San Sebastian to attend mass and to conduct their secular business affairs. According to Spanish law, any barrio that was at least three leagues distant (a league is roughly equivalent to three miles) from the nearest church and, had a least 10 vecinos (citizens who were the head of their household) could petition the central government to allow it to become a municipality, provided, there were no objections from their present municipal government and, other adjacent ones. In any event, over the course of seven years the founders of Lares overcame various difficulties and the municipality of Lares came into being. 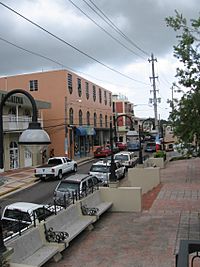 The following comprise the wards in the municipality of Lares: 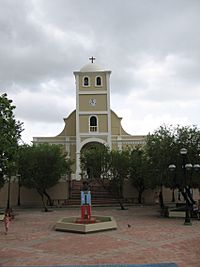 Lares has a professional volleyball team called Patriotas de Lares (Lares Patriots) that have international players including: Brock Ullrich, Gregory Berrios, Ramon "Monchito" Hernandez, and Ariel Rodriguez. The Patriotas won 3 championships, in 1981, 1983 and 2002. In 1981 and 1983 they beat Corozal in the finals and in 2002 they beat Naranjito. Some of the Native players were: David Vera 1979, Rigoberto Guiyoti 1979, Modesto 1980, Luis Vera 1980, Carlos Vera 1980,

Like most of the people of Puerto Rico, Lares population originated with the Taino Indians and then many immigrants from Spain settled the central highland, most prominently the Andalusian and Canarian Spanish migration who formed the bulk of the Jibaro or white peasant stock of the island. The Andalusian and Canarian Spaniards also influenced much of the Puerto Rican culture which explains the main Spanish dialect, and the Spanish architecture that surrounds the city. Europe had a lot of influences in their cultures, you can see evidence of European art throughout the island as well. This area of the Island has an array of cultures. Basque, French, Corsican and Italian is highly predominant due to the introduction of coffee in this region of the Island. Unlike coastal towns, in the mountain regions of Puerto Rico the people are predominantly white. 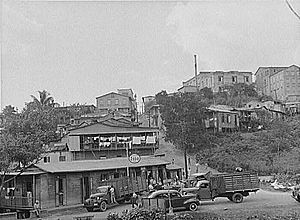 The origins of the municipality's flag can be traced back to the days of the failed 1868 revolt against Spanish rule known as the Grito de Lares. The flag is derived from the Dominican Republic flag of 1844-49 (reflecting the rebel leaders' dream to eventually join with the Dominican Republic and Cuba into one nation) and was knitted by Mariana Bracetti, a revolutionary leader, at the behest of Dr. Ramón Emeterio Betances, the revolt's leader, who designed it. This flag is formed by a white Latin cross in the center. The width of the arms and base are equal to a third part of the latitude of the emblem. It has two quadrilaterals located above and two below the arms of the cross. The superior (top) ones are blue and the inferior (bottom) ones red. A five-point white star is located in the center of the left superior (top) quadrilateral.

A white cross is centered on and extends across the shield from side to side and top to bottom; it has blue top quadrants and red bottom quadrants; it has a five pointed white star in the upper left quadrant. A chain surrounds the shield. The Coat of Arms as described has positioned around it on a scroll and a ribbon in a semicircle the words: "Lares Ciudad del Grito." This constitutes the stamp of Lares and identifies unmistakably the municipality of Lares.

All content from Kiddle encyclopedia articles (including the article images and facts) can be freely used under Attribution-ShareAlike license, unless stated otherwise. Cite this article:
Lares, Puerto Rico Facts for Kids. Kiddle Encyclopedia.