Maricao is the second-least populous municipality of Puerto Rico located at the western edge of the Cordillera Central. It is a small town set around a small plaza in hilly terrain, north of San Germán, Saban Grande and Yauco; south of Las Marías and Lares, southeast of Mayagüez, and west of Adjuntas. Maricao is spread over 15 wards and Maricao Pueblo (The downtown area and the administrative center of the city).

The town borders the Maricao Fish Hatchery, a collection of tanks and ponds in a garden setting, where some 25,000 fish are raised yearly to stock farm fishponds and island lakes. The hatchery is part of the Maricao State Forest, also known as Monte del Estado. Though of dryer vegetation than the other mountain forest, Maricao is home to large number of bird species. Its stone observation tower provides far-flung views to the coast and the Mona Passage.

Maricao was founded on April 1, 1874 when Bernardo Collado, Julián Ayala, Francisco M. Sojo, Napoleón Pietri and Leoncio S. Martínez requested the Provincial Deputation authorization to establish an official town. It originally belonged to the district of San Germán, but they alleged the roads were too long and almost impassable. Their request made references to a parish already established in 1866.

During the 19th century coffee boom, Maricao and other regions surged economically. When the spurt of coffee in the island ended by the start of the 20th century, the economic conditions deteriorated again. Many of the old plantation houses have been converted in museums to stimulate the tourism industry. While Puerto Rico still has a niche in the gourmet coffee market, the large scale coffee growing which built Maricao is no longer economically feasible.

In a silver field, resides an inverted "V"-shaped green band. Contained in the band are five golden huts. To either side and below the band are a total of three Maricao (Byrsonima spicata) tree branches with flowers. Surrounding the shield below and to either side are two coffee tree branches. Above it is placed a gold mural crown with three towers outlined in black with green doors and windows.

The origin of its name has two versions. It is said to come from the name of the Maricao tree (Byrsonima spicata) which has yellow flowers and grows in the region. The second version is a legend about a Taíno woman called María that, during the Spanish colonization, fell in love with a Spanish soldier. She informed him of an attack planned by her tribe and the Spanish took the offensive. María was then taken prisoner by her people and tried for treason. As was the tradition, she was tied to a tree and sacrificed. Allegedly "cao" means "sacrifice" so, Maricao means "María's sacrifice". 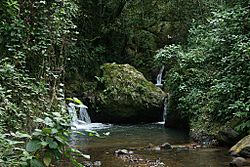 The region is mildly mountainous and belongs to the Western portion of the Cordillera Central.

The city of Maricao is itself sub-divided into several barrios (wards/districts): 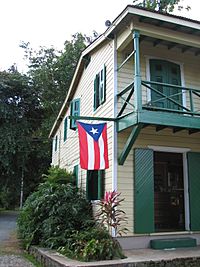 Due to its importance as a coffee plantation in the past, Maricao has several haciendas that have been turned into museums or guest houses. For example, Hacienda Delicias and Hacienda Juanita. Other places for tourists to visit are the Bambúa Recreational Center and the Maricao Fish Nursery. Some natural spots to visit are the Monte del Estado forest reserve, the Prieto Lake and the Salto de Curet (a waterfall).

Maricao has only one annual festival, the End of the Coffee Harvest festival, known locally as the Acabe de Café It celebrates the traditional harvest festival wherein the Hacienda Owners would fete their workers at the end of the harvest. It is held on the President's Day weekend in February. It was founded in 1977 by the then mayor, Vicente Byron, and has been going on for over thirty years. Also, in the Indieras they celebrate Indigenous Day Festival in the month of April.

According to the 2000 census, Maricao is the second least populous municipality in Puerto Rico, above the island municipality of Culebra, with 6,449 inhabitants. The population of the town has decreased during the past decades perhaps due to the decline in coffee production and the deteriorating economy. In 1899, the population was 8,312. The current population density is 174.2 people per square mile (67.0/km²).

As a whole, Puerto Rico is mainly made up of people from a Creole (born on the Island of European descent) or Spanish and European descent, with small groups of African and Asian people. Statistics taken from the 2000 census shows that 90.3% of Maricaeños have Spanish or White origin, 3.0% are black, 0.2% are Amerindian etc.

There is a general consensus in Puerto Rico that the barrios of Indieras in Maricao have the most people of indigenous origin in Puerto Rico.

There is no direct highway connection to Maricao. Roads #119 and #120 lead from the north, while Roads #121 and 105 lead from the south. Maricao lies at about 3 hours from the capital of San Juan.

All content from Kiddle encyclopedia articles (including the article images and facts) can be freely used under Attribution-ShareAlike license, unless stated otherwise. Cite this article:
Maricao, Puerto Rico Facts for Kids. Kiddle Encyclopedia.