San Germán is a historic town and municipality located in the Sabana Grande valley of southwestern region of Puerto Rico, south of Mayagüez and Maricao, north of Lajas, east of Hormigueros and Cabo Rojo, and west of Sabana Grande. San Germán is spread over eighteen barrios plus San Germán Pueblo (the historic downtown area and the administrative center of the city). It is both a principal city of the San Germán–Cabo Rojo Metropolitan Statistical Area and the Mayagüez–San Germán–Cabo Rojo Combined Statistical Area. San Germán is the second oldest city of Puerto Rico, after San Juan. The island of Puerto Rico was once split between the San Juan and the San Germán municipalities. The latter covered the western half of Puerto Rico, and extended from the western shores of the island to Arecibo in the north and Ponce in the south.

Spanish settlement in the original city of San Germán occurred early in the conquest and colonization of Puerto Rico. After the destruction of a small early settlement near modern-day Añasco during a Taíno uprising which started in February 1511, the new settlement was built by Miguel Diaz at Guayanilla and named after Germaine of Foix, the new queen of King Fernando. This town was attacked by French corsairs in August 1528, May 1538 and 1554. The construction of a small fort began in 1540, but work stopped in 1546 when the population of the town began moving inland to the current modern location.

An early written reference to the new town occurs in 1573. A letter sent to Spain's king Philip II mentions a city with the names of Nueva Salamanca and San Germán. Spanish conquerors used the name Nueva Salamanca to honor the city of Salamanca in Spain.

On May 12, 1570, the Royal Audience of Santo Domingo (see Audiencia) ordered that both the populations of San Germán and Santa María de Guadianilla be merged into a single city due to the constant attacks. The new city was built on the hills of Santa Marta, next to the Guanajibo River in 1573. Its official name was Nueva Villa de Salamanca, named after the city of Salamanca in Spain. However, the population would call the city San Germán el Nuevo (The New San Germán) and, eventually, the Villa de San Germán (The Village of San Germán).

San Germán is also known as the founding city of towns, given the fact that in 1514 the Spanish crown separated the island into two administrative territories (Partidos). The borders of the two partidos were established as the Camuy River to the north and the Jacagua river to the south. They were named the San Juan Partition and the San Germán Partition.

Towns that came out of the San Germán Partition

San Germán is the site of the Porta Coeli church, one of the earliest Spanish cathedrals built in Latin America. Porta Coeli is still a major attraction that brings both domestic and international tourists every year. 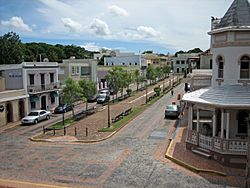 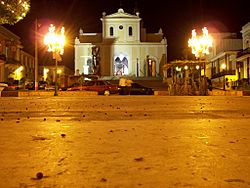 The urban center of San Germán is mainly composed of Spanish colonial houses. Many have been restored and conserve their Spanish look while other houses are somewhat abandoned and in poor condition. There are ongoing projects employing public and private funding to preserve and restore many houses and monuments and to maintain San Germán's colonial era look.

San Germán is home to one of Puerto Rico's oldest basketball franchises, dating back to the 1930s, the San Germán Athletics (los Atléticos de San Germán), nicknamed "The Orange Monster". Many glories of Puerto Rican basketball have played in San Germán, a city that is also known as "The Crib of Puerto Rican Basketball". Some of those players are Arquelio Torres, José "Piculín" Ortiz, Eddie Casiano, Nelson Quiñones, Elías "Larry" Ayuso, Christian Dalmau, and so many others. Their home court is The Arquelio Torres Ramírez Court, which houses approximately 5,000 fans.

The Athletic's fan base is most commonly referred to as their sixth man, or "The Orange Monster". This is because for a visiting team it's extremely hard to win in San Germán due to how vigorous and "into" the game the fans are.

The Athletics have been to 26 National Superior Basketball (BSN) Finals, of which one was cancelled (1953) due to confiscation because of a fight between players from San Germán and the Ponce Lions, giving birth to Puerto Rican basketball's most intense rivalry.

Green - The Episcopal dignity and also the color of the Shield of Christopher Columbus and his son, don Diego Colón, Viceroy of the Indies, who named the city in honor of Germana de Foix.

White - The purity of the blood of the great families who colonized San Germán.

First Quarter: The Mitre and the Staff in a green field represent St. Germain of Auxerre, the Patron Saint of the city.

Second Quarter: The second quarter exhibits the arms of the Kingdoms of Aragón and Sicily, where don Fernando the Catholic reigned.

Third Quarter: In this quarter the arms combine with the County of Foix and the Kingdom of France, which constitute the family shields of Germaine de Foix whose name is perpetuated as the name of the city of San Germán.

Fourth Quarter: Is Ponce de León's shield, The Crown: Is a civic or municipal standard and is used as a stamp for towns and cities; San Germán was assigned five towers to denote that this population formally obtained the title of city from the Spanish crown in the nineteenth century.

The area around San Germán grows fruits (banana, pineapple) and sugarcane on mid-scale. Dairy farms are also present in small scale. Some locals grow other produce on a small scale.

Most businesses are located in or near the downtown area (San Germán Pueblo). Plaza del Oeste is the main shopping center.

The following schools are in San Germán:

The main campus of the Inter-American University of Puerto Rico is located adjacent to the downtown area of San Germán. It was founded in 1912 as the Polytechnical Institute of Puerto Rico, the first private university on the island. The Colegio San José, was a private school which was established in San Germán in 1930 and closed in 2017.

By the 16th century there was a rough road called Camino de Puerto Rico (Camino Real) connecting San Germán (which was located near the mouth of the Añasco River) to other areas of Puerto Rico, including San Sebastián, Arecibo, Toa Alta, and Caparra.

All content from Kiddle encyclopedia articles (including the article images and facts) can be freely used under Attribution-ShareAlike license, unless stated otherwise. Cite this article:
San Germán, Puerto Rico Facts for Kids. Kiddle Encyclopedia.