Guayanilla is a town and municipality of Puerto Rico located on the southern coast of the island, bordering the Caribbean Sea, south of Adjuntas, east of Yauco; and west of Peñuelas and about 12 miles (19 km) west of Ponce. Guayanilla is spread over 16 barrios and Guayanilla Pueblo (the downtown area and the administrative center of the city). It is part of the Yauco Metropolitan Statistical Area.

Guayanilla was founded by Puerto Rican criollos. The original name was Guadianilla in memory of a river of the same name in Spain. However, it was changed to Guayanilla to resemble a native word in the Taíno dialect. The name Guayanilla is derived from a combination of Guaynia and Santa Maria de Guadianilla.

The first Europeans settled in this area in 1511. In 1756, Yauco was founded as a town. Then Guayanilla was a borough of Yauco. Due to the very fertile lands and access to the local port where most of the local commerce occurred, Guayanilla became an important agricultural center, grew quickly, and was established as a separate municipality on February 27, 1833 by Governor Miguel de la Torre.

On April 27, 1584, Raleigh dispatched an expedition led by Philip Amadas and Arthur Barlowe to explore the Eastern coast of North America. They arrived on Roanoke Island on July 4, and soon established relations with the local natives, the Secotans and Croatoans. Barlowe returned to England with two Croatans named Manteo and Wanchese, who were able to describe the politics and geography of the area to Raleigh. Based on this information, Raleigh organized a second expedition, to be led by Sir Richard Grenville.

Grenville's fleet departed Plymouth on April 9, 1585, with five main ships: the Tiger (Grenville's), the Roebuck, the Red Lion, the Elizabeth, and the Dorothy. Unfortunately, a severe storm off the coast of Portugal separated the Tiger from the rest of the fleet. The captains had a contingency plan if they were separated, which was to meet up again in Puerto Rico, and the Tiger arrived in the "Baye of Muskito" (Guayanilla Bay) on May 11. 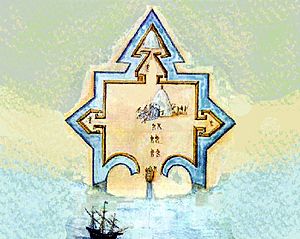 A watercolor of the fort in Guyanailla Bay, which is likely similar to the fort constructed on Roanoke

While waiting for the other ships, Grenville established relations with the Spanish there while simultaneously engaging in some privateering against them, and also built a fort. The Elizabeth arrived soon after the fort's construction. Eventually, Grenville tired of waiting for the remaining ships, and departed on June 7. The fort was abandoned, and its location remains unknown.

The coastline forms the Guayanilla Bay, one of the best natural harbors in Puerto Rico, to the south, also. The nearest city is Ponce, which is 12 miles (19 km) to the east. The northern regions are bordered by mountains that reach 3,300 feet (1,000 m). In the central regions, the terrain descends where it does not exceed 1,410 feet (430 m). Finally in the coastal plain, the elevations do not exceed 951 feet (290 m). The Yauco, Guayanilla, and Macaná rivers all run through the municipality. The Yauco River briefly runs through the Boca borough, where its exit into the Caribbean Sea and accompanying marshlands are located.

Guayanilla is divided into the following barrios (wards/districts), population of each listed in parentheses: 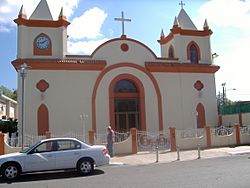 Church in the Guayanilla town plaza.

The Nazario Collection, a set of inscribed stones discovered by Catholic priest and amateur archeologist José M. Nazario (and which popular culture links to taíno high chief Agüeybaná II), has become a cultural symbol for the municipality. The statuettes serve as the center piece of Guayanilla's Father Nazario Museum of Lithic Epigraphy.

The main industries in Guayanilla are the manufacturing of petrochemicals and the production of electricity by thermoelectrical plants. Guayanilla produces over half of Puerto Rico's electricity. The breakdown of occupations are as follows:

The following schools are located in Guayanilla and students from both schools have participated in the Rose Parade in California on several occasions:

There are 35 bridges in Guayanilla.

All content from Kiddle encyclopedia articles (including the article images and facts) can be freely used under Attribution-ShareAlike license, unless stated otherwise. Cite this article:
Guayanilla, Puerto Rico Facts for Kids. Kiddle Encyclopedia.