Peñuelas is a municipality in Puerto Rico located in the southern coast of the island, south of Adjuntas, east of Guayanilla, west of Ponce and north of the Caribbean Sea. Peñuelas is spread over 12 wards and Peñuelas Pueblo (The downtown area and the administrative center of the city). It is part of the Yauco Metropolitan Statistical Area. Peñuelas is known as "La Capital del Güiro" (The Güiro Capital) and "El Valle de los Flamboyanes" (The Valley of the Poinciana Trees). Penuelas has about 20,000 inhabitants.

In 1754, a group of workers had settled over the bay of Tallaboa. Later gradually retreated deeper into the valley, heading towards the most fertile land which would then be part of the town of Peñuelas. For the year 1788, approximately 80 families inhabiting the valley, which focused mainly on agriculture and livestock. Peñuelas Township was founded August 25, 1793 by Diego de Alvarado. In 1874, the town had been developed and already had 9.206 inhabitants, according to a census of that year. The town already had four main roads, some streets, a brick church and the town hall, which also served as a prison, barracks and even cemetery and carnage. On March 1, 1902 the Legislative Assembly of Puerto Rico approved a law to consolidate certain municipal districts, so Peñuelas neighborhoods were attached to the town of Ponce. In 1905, the same Assembly repealed the law and it became again the municipality.

The first incident of the Puerto Rican Nationalist Party Revolts of the 1950s occurred during the early hours of October 29, 1950, in Peñuelas, when the insular police of that town surrounded the house of the mother of Melitón Muñiz Santos, the president of the Peñuelas Nationalist Party in the bario Macaná, under the pretext that he was storing weapons for the Nationalist Revolt. Without warning, the police fired upon the Nationalists in the house and a firefight between both factions ensued, which resulted on the death of two Nationalists and the wounding of six police officers. Nationalists Meliton Muñoz Santos, Roberto Jaume Rodriguez, Estanislao Lugo Santiago, Marcelino Turell, William Gutirrez and Marcelino Berrios were arrested and accused of participating in an ambush against the local insular police.

Rivers near Peñuelas include: 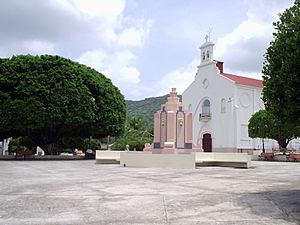 It has a rectangular bottom in canary yellow and stands for the sun, symbol of the physical life. In the center it has a purple or violet cross: symbol of Christianity and its ecclesiastical order; it represents the spiritual life. The cross purple extends to all the points of the yellow rectangle.

There are several poems that allude to the people of Peñuelas. Among them are the book, The Literature Peñuelas "Yagrumal" or "The Cultural History Peñolano Almanac, " which is classified into several volumes and contain poetry about the different neighborhoods and sections of the people of Peñuelas. Some of the poets who took the time to create works in relation to this southern town are E. Myriam Rodríguez Hernández, Manuel Díaz Rodríguez, Karina Arroyo, Carlos J. Velazquez Cruz (creator and editor of the journal Yagrumal), Elan Rafael Novoa, Miguel Feliciano Román, Silvio Echevarría Rodríguez, Rigoberto Ramirez Cruz, Marcos Ortiz Gelpi, Peter J. Ramos, Ramon Rivera (Bonye), among others.

Public bus service which connects you to Ponce city (east) and Guayanilla (west).

All content from Kiddle encyclopedia articles (including the article images and facts) can be freely used under Attribution-ShareAlike license, unless stated otherwise. Cite this article:
Peñuelas, Puerto Rico Facts for Kids. Kiddle Encyclopedia.